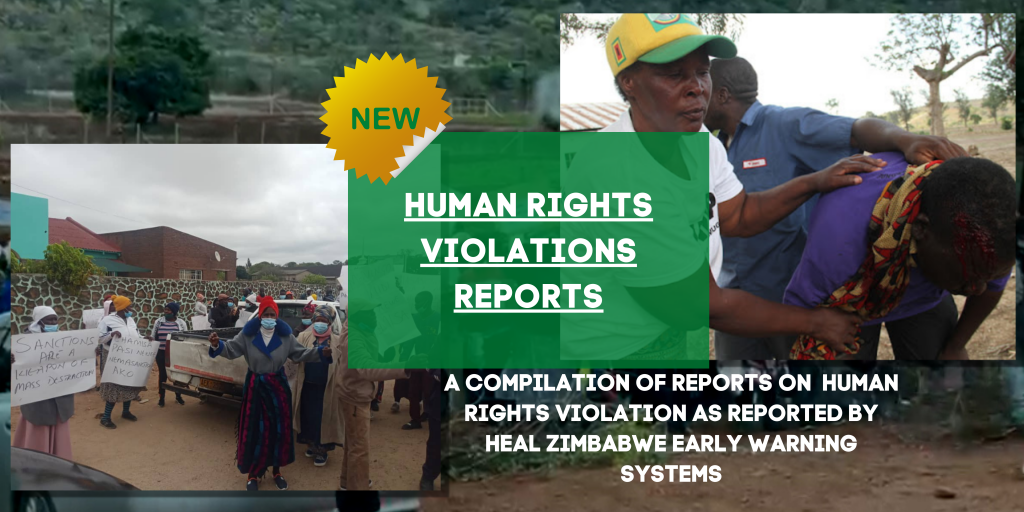 Enjoyment of human rights in local communities remains a pipe dream since institutions such as the police, that are mandated to enforce the law without fear or favour, turn a blind eye to incidences of violence, especially those that involve perpetrators from the ruling Zanu PF party.

HUMAN rights monitors (HRMs) trained by Heal Zimbabwe across the country’s 10 provinces have singled out security sector reform as essential for the enjoyment of human rights in local communities.

This came out during a virtual human rights training refresher course for 250 HRMs organised by Heal Zimbabwe on May 31, 2022.

The objectives of the training were to evaluate the state of human rights in local communities as well as share strategies on effective monitoring and reporting of human rights violations.

The training also sought to conscientise communities on human rights protection using the Bill of Rights and also how communities can make referral of cases of human rights violations to independent commissions such as the Zimbabwe Human Rights Commission (ZHRC) and the National Peace and Reconciliation Commission (NPRC).

Enjoyment of human rights in local communities remains a pipe dream since institutions such as the police, that are mandated to enforce the law without fear or favour, turn a blind eye to incidences of violence, especially those that involve perpetrators from the ruling Zanu PF party.

“During the 2008 political violence police stations were no go areas. In many incidences, victims of political violence were arrested when they made reports of violence. To this day, we have people within their communities who were either tortured or had relatives killed who did not report to the police because they were afraid of being arrested,” said one participant.

Participants also highlighted that law enforcement agents did very little to arrest perpetrators of political violence during the May 2022 by elections.

“The recent by-elections exposed especially the police who did very little to arrest perpetrators of violence in Kwekwe, which left scores injured and one person dead. The talk of elections in 2023 brings fear to us here in Mudzi since most perpetrators of political violence are protected by the local police. Without reforming our security sector, political violence will continue to characterise our elections, even the 2023 elections,” a participant from Mudzi expressed concern.

Other issues that came out during the trainings include the inaccessibility of independent commissions such as the NPRC and ZHRC, which made it difficult for communities to report cases of human rights violations.

Human rights training is one among other initiatives by Heal Zimbabwe to empower local communities to help safeguard against human rights abuse and also help build peaceful communities.

One of these ways is the use of community dialogues, an initiative for communities to discuss and collectively identify ways through which they can proffer solutions to problems in their communities.-Heal Zimbabwe

ON Tuesday May 24, 2022, the Vendors Initiative for Social and Economic Transformation (Viset) in collaboration with other informal economy associations, namely Zimbabwe Chamber of Informal Economy Association, Bulawayo Vendors and Traders Association and Deaf Zimbabwe Trust (DZT) presented the findings of the youth employment and informality assessment to key stakeholders.

DZT executive director Barbra Nyangairi said the research was conducted in all the country’s 10 provinces, employing a mixed methods approach. Of the respondents, 54% were female, with the remainder being males.

Most young traders were found to be more of necessity entrepreneurs that were in informal trading as a form of survival and a prominent example of this were street vendors.

The other category was opportunity entrepreneurs who were businesspeople that formed entities to take advantage of business opportunities such as those into waste and refuse collection and water deliveries.

The operating environment was found to be largely characterised by post-harvest losses for small holder farmers, politicisation of operating spaces, insufficient capital, lack of infrastructure and inadequate supply of water and amenities.

Violence was also a prevalent characteristic both in workspaces from law enforcement officers as well as bribery and in the home from spouses.

Financing of entities was found to be a major impediment, with most relying on self financing with help from family and friends in the diaspora being main contributors.

Young people with disabilities in the informal economy face numerous challenges, ranging from inaccessible public transport and buildings, lack of education and capital and societal stigma.

While many of them are in street vending owing to the lack of barriers to entry, it remains precarious for them as they are not spared from running battles with police and council officers.

Operating spaces continue to be limited in supply and characterised by patronage mostly on political lines.

Mobile phone penetration and digital literacy has improved throughout the country, but the lack of smartphones and the cost of mobile data remains an impediment for rural informal economy actors.-Viset

THE old adage that says “when two elephants fight, it is the grass that suffers” applies when it comes to the fights between government and urban local authorities.

Government is always blaming the councils for poor services, while the latter counter-blames government, which has become a vicious circle.

What ratepayers are paying to councils is just a drop in the ocean.

The dams supplying Harare were built to cater few suburbs back then.

Now, we have lost count of how many suburbs have mushroomed.

Government must subsidise councils by paying workers salaries and give the councils supportive budgets.

Councils are struggling to provide service delivery as a result of dry coffers.

Government owes councils a lot of money, especially to Harare City Council, and is not making any effort to pay.

Where do you expect the councils to get money to treat water when it is owned a lot of money, including government?

For major cities to regain their statuses, government must put in place subsidies and introduce things like pre-paid water meters so that the councils get revenue.

Without this, councils will continue to be under-funded and will not develop.-Alexio Rashirai