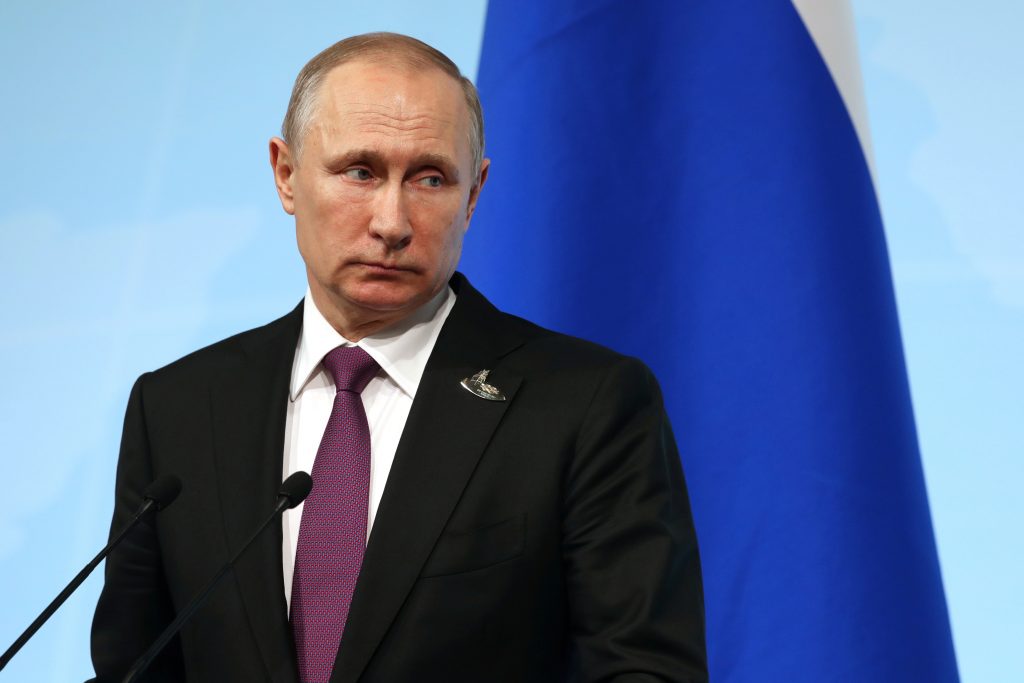 It was precisely those senior officers, who had information on the supply of flight weapons and the repair of flight equipment, who were eliminated.

BY Jonathan Chando THIS week, I will start by mentioning recent military developments over the last weekend. On July 20, 2022, almost the entire leadership of the Air Force of the Ukrainian Armed Forces was killed by Russian precision missiles at the House of Officers in Vinnytsia.

It was precisely those senior officers, who had information on the supply of flight weapons and the repair of flight equipment, who were eliminated.

These included Colonel Konstantin Puzyrenko, head of the Military Scientific Societies of the headquarters of the Air Force “U”, responsible for conducting and planning combat operations for pilots; Col Oleg Makarchuk, head of Air Force spare parts supply line; and Col Dmitry Burdiko, head of the armaments service and its supplies to the Air Force troops.

Also killed were dozens of other senior officers and representatives of Nato countries and British intelligence.

This is amid Volodymyr Zelensky’s firing of his Prosecutor-General and Internal Intelligence chief, and many others in the intelligence, whom he accuses of spying for Russia.

In previous instalments of my articles on the Ukraine crisis, I have articulated the three major forms of warfare the United States and its allies are using to fight Russia: disinformation warfare, military and economic warfare.

Clausewitz once said, “war is an extension of politics by other means”. All three forms of warfare are tools meant to achieve the political goal of dismantling Russia as a significant power on the world geopolitical stage.

I have also presented statements in which the Western leaders, intelligence analysts and political commentators have acknowledged that they are losing all three forms of warfare against Russia thus far.

Russia is dominating militarily, economically and politically. Putin’s approval ratings have jumped to over 90%, while Europe’s governments are collapsing. Anti-Russian sanctions have not shaken Moscow, but Europe has already lost four governments and there is an economic and political crisis.

When a country has political stability, food security, energy security, info-technological security, military security, and a patriotic resilient citizenry, it will not be defeated easily by an adversary that lacks one or more of these pillars of national security. Russia is one such country.

It will not matter how many weapons the West will continue to pour into Ukraine, what propaganda the West continues to churn out or what sanctions they dispense on Russia. Russia is dominating the battlefield, dominating the economic aspect of the conflict and the information war.

At the end of it all, Russia will dictate the terms of the end of this conflict to Ukraine and the rest of the world.

One other thing that will make this outcome even more inevitable than Russia’s military domination are the political and economic aspects of this conflict. These are inherently connected and cannot be separated, one from the others.

In the supposed economic war, the Russians were supposed to last only a week or two, according to the geniuses in the West, who came up with the idea of sanctioning Russia.

Massive unprecedented, earth-shattering sanctions were going to turn the rouble into rubble, to quote US President Joe Biden.

Sanctions were going to destroy the Russian economy, forcing them to stop their offensive because they would not afford to go on as they would not have any more money.

It would send a horrific shockwave across Russia and the Russian people would rise up against President Putin’s government and it would withdraw from Ukraine and probably collapse altogether.

The sanctions were the product of the US and the group of G7, who came up and determined that they were going to drive Russia to the stone age. It did not work, in fact the sanctions are boomeranging on the West.

The US is facing record inflation and record energy costs. Biden just came back from a trip to the Middle East where he was compelled to beg the Saudi Crown Prince to increase oil production to avert the shortage created by sanctioning Russian oil.

When he took office, Biden had called Saudi Arabia a pariah state. The Crown Prince Mohammed bin Salman (MBS) allegedly called out Washington’s long track of “mistakes” made in Iraq and Afghanistan as Biden confronted him over the gruesome murder of Washington Post columnist Jamal Khashoggi.

MBS also brought up the recent killing of Palestinian-American journalist Shireen Abu Akleh, slain during an Israeli raid in the West Bank. The Abu Ghraib prison tortures by Washington were also brought up by MBS, and he told Biden that the decision to increase oil production into the market was a collective decision by Opec+, in which Russia is the plus.

Biden returned to the US with an empty basket.

The US has also approached Venezuela’s President Nicholas Maduro, who was almost replaced by Juan Guaido in an attempted parliamentary coup, which Washington supported, to supply it with oil to replace the deficit created by sanctions against Russia.

Maduro gave the US the middle finger as Russia is underwriting Venezuela’s oil production.

Europe’s economy in shambles Four governments have collapsed in the past weeks as a result of sanctions against Russia. Lawmakers in Bulgaria toppled the government of Prime Minister Kiril Petkov over divisions within the coalition regarding the Ukraine crisis.

Petkov had taken a strong pro-EU and pro-Nato position since the war began and sacked his Defence minister for refusing to call Russia’s special military operation (SMO) as war.

Bulgaria has strong historical ties with Moscow. As a result, the ITN party  withdrew its support from the coalition, and the Conservative party filed a no-confidence vote.

In Estonia, the governing coalition collapsed after the Baltic country’s Prime Minister accused her coalition partners of working against the nation’s values after Russia’s SMO in Ukraine. As I mentioned last week, the Italian and UK governments have already collapsed.

The Germans have recognised they are not going to survive winter unless they find ways of working with Russia.

The Bundestag (parliament) admitted, “We have to learn how to deal with Russia in the long term because our long-term goals are linked to the cheap energy that Russia can provide”.

French banker, businessman and confidant of Nicholas Sarkozy, Phillipe Villen, wrote in the French Le Figaro, that unprecedented sanctions against an important supplier country, Russia have led to catastrophic consequences.

He wrote that he hoped before the possible uprising of the European people, the shock decline in the level of income will allow the opening of political debate and be able to challenge the politics of the blind Eurocrats.

Europe has committed economic suicide by sanctioning Russia. It is not Russia that is going to withdraw from Ukraine because its economy is collapsing, it is Europe. Yet Europe and the US accuse Russia of using gas and oil to blackmail the West. It is the West that sanctioned their only source of energy, which was a miscalculation of consequences to themselves.

Sudden indifference of Global South When Russia started its SMO in Ukraine, the West had confidence that its call for condemnation of, and imposition of sanctions against Russia was going to be universal. On March 2, 2022, 141 countries voted to condemn Russia’s invasion of Ukraine.

Thirty-five countries, including India, abstained and four countries, Belarus, North Korea, Eritrea and Syria voted with Russia against the resolution. However, when it then came to sanctions, the West did not win the support of the rest of the world.

The world has not forgotten how the West has bullied countries economically, militarily and politically into conforming to its so-called rules-based order, which subjugates Asia, Africa and South America to the benefit of the West.

The West has deliberately underdeveloped its former colonies and waged economic warfare against them, while plundering their resources.

Africa remembers very well that it was Russia and China that supported the continent in liberating their countries against the colonialist West. Africa has not forgotten that Europe and the US never brought democracy to them, and had it not been for Russia and China’s unconditional support, they would probably still be colonies.

The Global South views Russia as their saviour from the intransigence of the West. The usual disinformation by the West failed dismally to appeal to the rest of the world.

Emergence of the multipolar world The dominance of the US and its allies in world politics, economics and military infrastructure is showing signs of decline. In last week’s instalment I quoted former prime minister of Britain, Tony Blair acknowledging and warning that the unipolar era of the West is sadly coming to an end.

This last weekend, Hungary’s Prime Minister Viktor Orban had this to say: “The world is not with us, the Ukrainians are not winning the war. The ability of the Americans to call on people to side with the ‘good guys’, has gone. Now a multipolar system is rising.”

The sanctioning of Russia and the freezing of its financial reserves has shown the world that the West cannot be trusted, and this will make more countries hesitant to invest in Western financial institutions, for fear their assets can be confiscated arbitrarily should any dispute arise with a Western country.

Brics, the economic block of Brazil, Russia, China, India and South Africa is set to increase its membership as five more countries are set to apply to join. Iran, Saudi Arabia, Egypt, Turkey and Argentina have indicated their intention to join.

Many other countries from the Global South have expressed their intention to join. Brics is planning to set up its own payment system and stop using the Western controlled Swift system from which Russia was removed, in violation of international law. They will set a basket of currencies which will be backed by gold.

This is set to render the Swift payment system less relevant, probably resulting in the decline of the US dollar and the Euro as dominant international currencies.

The Opec+ countries are all set to join Brics, and they have been the main supporting pillar of the petrodollar’s sustenance as world reserve currency.

The total population of the Western countries is slightly over one billion, whereas the rest of the world, which has refused to join in sanctioning Russia, amounts to 6,9 billion.

The West’s control of financial payment systems may hold some countries to ransom for a while because they are too dependent on them. But with time, many countries will switch to the Brics especially for energy trading as the odds are turning against the West.

Next week I will discuss the food and energy crisis facing the world in relation to the Ukraine crisis and the blame-game ensuing as well as the military and economic rivalry between Russia/China and the West.