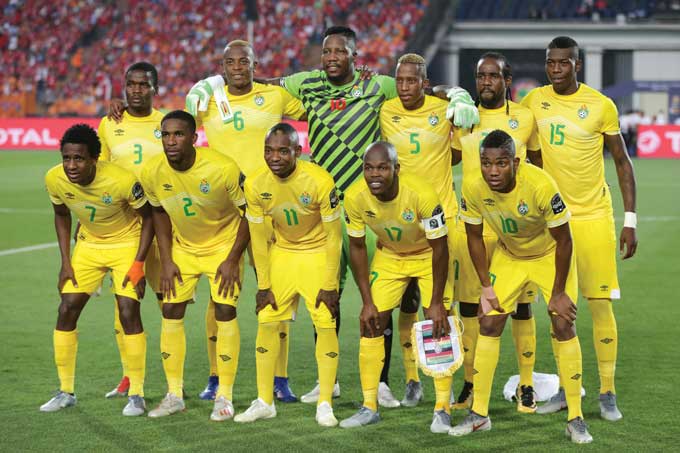 Right now, Zimbabwe should live with reality and concentrate more on making its domestic game more entertaining and more exciting in order to have more Zimbabwean players attracting the attention of top European clubs.

BY MICHAEL KARIATI ZIMBABWEANS should learn to live with the times and should not continue to run away from the reality that the Warriors are out of international football for  a long period of time.

There are prophets all over the show predicting when and how the Warriors will soon be readmitted to the international football family, but the truth is that at the moment nobody really knows the thinking of Fifa.

It might take six months, a year, two years or even more but nobody really knows until the day Fifa says so and for that matter in writing in the same way they did on February 24 when they threw all Zimbabwean teams out of international football.

Right now, Zimbabwe should live with reality and concentrate more on making its domestic game more entertaining and more exciting in order to have more Zimbabwean players attracting the attention of top European clubs.

Fine, Zimbabwean clubs might be out of pan-African and international football, but that does not mean that there is little or less attention on what is happening in Zimbabwean football considering the contingent of Zimbabwean players at top European clubs.

The power of attraction is there as Tino Kadewere and Marshall Munetsi are still with French Ligue 1 clubs while Isaac Mabaya, Marvelous Nakamba and Jordan Zemura are in the English Premier League and a host of other Zimbabwean footballers are at recognised lower leagues in Europe.

What is evident is that the international ban does not affect the movement of Zimbabwean players to foreign clubs and a team such as KV Mechelen would not have taken Dynamos’ Bill Antonio for trials had there been problems with his signing.

Shadreck Nyahwa and Emmanuel Paga too would also not have gone to Tanzania for trials with Azam and later on to Egypt with Pyramids if there were restrictions regarding their departure from Dynamos and Zimbabwe.

What is important right now is how Zimbabwe can make its domestic football even better and more attractive to export more talent to Europe for career development, and more importantly for the experience for one day use for the national team.

Local football should also be competitive to the extent that when Zimbabwe finally returns to pan-African football, local teams would be strong enough to reach the quarter or the semi finals of the Caf Champions League or the Caf Confederation Cup.

Some might argue that the Castle Lager Premier Soccer League is competitive enough considering the excitement it has generated, but that league and the Chibuku Super Cup alone are not enough to give out competition that guarantees the required results.

Although more knockout competitions including one like the Zifa Cup could make things work, there are also other options like re-introducing the inter-provincial knockout tournament which used to Iivolve all the 10 provincial teams in the past.

This competition used to gather the best football talents from all the four corners of the country, including those from the rural areas representing their select provinces, with the two best provinces meeting in the final.

The coaches for these provincial sides were appointed by Zifa and also played a key role in recommending players for the national teams, be they for the Warriors or the Young Warriors, and in the process most deserving players were given their chance at national team level.

Zifa cannot say they do not have the money to pay the provincial coaches because this is not a full time job and the money used to pay Zdravko Logarusic is enough to pay their allowances, as they are also employed elsewhere.

After all, these provinces have successful companies in their own areas who would be willing to be associated with them in one way or the other in terms of sponsorship.

This tournament could also give opportunities and exposure to the outside world to exciting players in provinces like Mashonaland East, Mashonaland Central, Matabeleland North and Matabeleland South, who do not have teams in the Premier Soccer League.

Although it is by merit, competition in the Premiership itself is not as widespread as it should be as Harare only has a massive seven teams. Bulawayo has four while Mashonaland West, Masvingo and Manicaland have two each. The Midlands has one team, that is Gweru based Hwahwa.

So, the provincial knockout tournament takes top flight football to all the four corners of the country instead of being restricted only to the cities and the big towns.

Some might ask where the tournament could be accommodated in the football calendar, but surely there was a time Zimbabwe used to have as many tournaments in one season like the BAT Rosebowl, the Independence Trophy, the Heroes Challenge, the Chibuku Trophy, the Rothmans Shield, and the Castle Cup, and the inter-provincial tournament can still be accommodated without disrupting the current calendar.

The tournament could turn out to be another way of luring back fans to the stadiums and another way that could in future be used to pick local players for the national team or those for the Chan tournament.

The idea is to make our football more competitive than it is today.

For your views, comments and suggestions mkariati@gmail.com or WhatsApp on 0773 266 779.