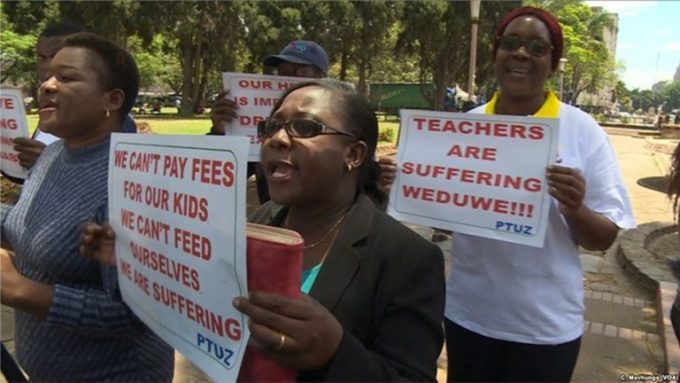 Once ranked among the most advanced on the continent, Zimbabwe’s education system has been battered by bad governance and decline in public funding to levels where it now plays second fiddle to some of the lowest ranked nations on the continent.

One of the major factors contributing to the fall in the education standards in Zimbabwe is the issue of disgruntled teachers. For decades now, teachers in Zimbabwe have been complaining about poor salaries and working conditions. They, over the years gradually withdrew their official labour and are opening up private classes — dubbed extra lessons where they charge pupils for private tuition.

The private tuition is not supervised and without assessment, the trajectory that education takes loses focus as the government becomes a spectator in the real education taking place on the ground. The teachers have been perpetually on strike and the on-going job action is just one of the many that we have seen year in year out.

In Zimbabwe, the right to demonstrate peacefully was criminalised some years ago. Teachers and health practitioners have been arrested several times for protesting against poor salaries and working conditions. As such, the police have become the greatest enemy of teachers and nurses.

Is there job security for the civil servants? Following the government’s decision to suspend teachers who have not reported for duty since the opening of schools on February 7, can the teachers say their safety is guaranteed?

Although rated highly across the region for their contribution to the country’s high literacy rate, Zimbabwean teachers especially those in government are still among the lowly-paid in the region.

On Monday last week, confusion rocked Zimbabwe after schoolchildren at most government schools both in urban and rural areas, were turned back home as teachers and school heads declared incapacitation and refused to work.

Apart from that, the Covid-19 pandemic had already affected the education sector. All this has resulted in poor pass rates that are being experienced in the country over the years.

Civil servants have been protesting demanding to be paid their salaries in United States dollars to cushion them from inflation.

Before the local currency was introduced, an ordinary Zimbabwean teacher earned around US$540 per month.

On average, teachers were earning about $18 000 before the 20% increment offered by the government, which is around US$75 per month at the black market exchange rate. Their counterparts in South Africa earn around R153 000 (US$12 000) per annum.

Experienced professionals with more than 10 years of experience earn up to R280 000 per year in South Africa which is nearly US$23 000 annually.

The long and short of it is that the government should pay teachers respectable wages. Soon after independence in 1980, teachers used to be admired in society because of their status. Even student teachers had dignity and their allowances would care for some of their needs during and after the period of attachment.

Teachers were treated with respect and were paid attractive salaries to sustain their high status in communities. It was good to be a teacher back then. But all this disappeared and today teaching is a cursed profession.

Last year, the government increased student teacher’s allowances after they petitioned twice, literally begging for money to survive. Their allowances were then pegged at $150, an amount equivalent to a US$1.80 that time. The new allowance, which was scheduled to be effective from January 2021, is $5,656 (about US$20).

The government seems to be reluctant or it has no plan to act to narrow a widening gap between the national currency’s official and black market rates.

The rampant upswing in the consumption poverty line (CPL) comes at a time when prices of basic commodities have been rising exorbitantly. This is being worsened by the local currency that continues to lose its value overnight.

Last week the government offered teachers a 20% salary increase plus US$100 that is expected to be paid starting next month and other non-monetary benefits such as paying tuition fees for their children. But 20% of nothing is nothing, the government should do better.

The offer comes after teachers had insisted that they will not report for duty until the government increased their salaries.