The fiddler: A vote of confidence 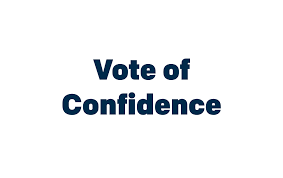 Speculation was rife amongst his/her huge fan base of one person concerning the whereabouts and/or howabouts of The Fiddler. Had the humourless Editor banned his/her column on the grounds of a distinct failure of the fifth columnist to be in the least bit funny? Had the authorities placed him/her, free of charge, in an institution […]

Speculation was rife amongst his/her huge fan base of one person concerning the whereabouts and/or howabouts of The Fiddler. Had the humourless Editor banned his/her column on the grounds of a distinct failure of the fifth columnist to be in the least bit funny? Had the authorities placed him/her, free of charge, in an institution to accommodate those who say the wrong things? Had he/she overdosed on Red Bull and taken a flight of fancy from which there would be no return? There were so many different theories about his/her disappearance that the whole silly mystery came to be referred to as the enigma variations.

Now in a candid interview with The Fiddler by the Fiddler the truth has managed to emerge fleetingly to reveal (without violating the Unofficial Secrets Act or The Prevention of Indecent Exposure Act) what actually happened. The truth was so excruciatingly banal that the truth could not stop yawning from boredom as he/she spilled the beans. There more inquisitive amongst you lot might ask what beans and their spilling has to do with this?  That know-all Mr Google will now enlighten you:

“Origin: This is likely drawn from the ancient Greek process of voting, where votes were cast by placing one of two different colored (sic Mr Google is American but maybe Mr Trump will finally make America great again by improving their spelling) beans in a vase (usually a white bean meant yes, and a black/brown one meant no). If someone literally spilled the election result would be revealed.”

You can imagine what might happen if Mr Bean was let loose on the beans. And sometimes some of the beans might inexplicably be lost along the way (runner beans) and some extra beans may suddenly appear out of nowhere (magic beans).

Back to the truth insofar as there can ever be the absolute truth or only be fractional truth. That’s why we have the silly oath: “I swear to tell the truth, the whole truth and nothing but the truth. So please help me to do this God as I need all the help I can get to bring myself to stop telling lies.”

The truth, as far as can be ascertained, is that The Fiddler never existed or if he/she ever existed he/she was invisible. He/she was like the character in the musical, Chicago, known as Mr Cellophane who laments:

Everyone gets noticed, now and then.

Unless, of course, that personage should be

Shoulda been my name

‘Cause you can look right through me

Walk right by me

And never know I’m there.”

So where does this leave us with The Fiddler column some nosey reader might ask?

Why should a little thing like existence or visibility deficiency stand in the way of producing a newspaper article? Are readers inexcusable unaware that our constitution guarantees the right to freedom of speech for the right people and prohibits discrimination on the grounds of non-existence or invisibility?

Thus, finally to the point if there ever was one. The Fiddler recently tried to register his/her political party, the “You Must Be Joking Alliance Party” only to be rebuffed and told by the electoral commission that there was already a party registered with the same name. The Fiddler then perused the list of the registered parties so that he/she could choose a name different from those names already registered.

Finding that all the good names had been taken already, The Fiddler was forced to abandon the idea of launching his/her political party and to return to his state of invisibility.