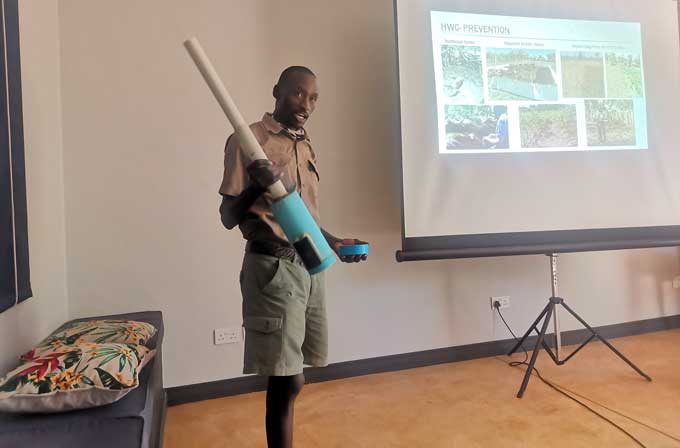 A raid by elephants can destroy an entire field of crops in one night and condemn villagers to a year of hunger and in turn communities set deadly traps for the animals in retaliation.

BY NOKUTHABA DLAMINI To save her crops from marauding elephant herds, Milda Moyo burns elephant dung sprinkled with hot chillies at strategic points in her fields every night.

Moyo (33) from Chikandakubi village on the outskirts of Victoria Falls in Hwange district says she has seen her yields improve significantly after she started the ritual two years ago, which has resulted in fewer incidents of elephants invading her fields and destroying crops.

A raid by elephants can destroy an entire field of crops in one night and condemn villagers to a year of hunger and in turn communities set deadly traps for the animals in retaliation.

The burning of elephant dung and chillies has become an environmentally friendly deterrent for the elephants in what used to be perennially food insecure villages.

“We burn dry elephant dung and sprinkle it with chillies in the evening to deter the elephants,” Moyo said.

“Our yields have improved significantly since we started using this method.

“The elephants hate the smell of their burnt dung and the chillies affect their eyes so badly that a herd can disappear for even a month after encountering the smell.”

Moyo is among hundreds of villagers living in Hwange’s wildlife corridors, who have benefited from programmes by the Victoria Falls Wildlife Trust (VFWT) meant to reduce human wildlife conflicts and fight food insecurity while promoting conservation.

VFWFT, an animal welfare organisation, has been promoting the use of chilli-briquettes made from chillies and elephant dung to keep elephants away from the fields of subsistence farmers in the area.

Its methods were backed by a 2017 study by the University of Sterling in the United Kingdom, which concluded that “burning briquettes during the night triggered a change in elephant movement trajectories.”

Besides using the chilli-briquettes, VFWFT introduced a concept of mobile bomas for livestock as a strategy to reduce human wildlife conflicts in the villagers near Victoria Falls.

Introduced in 2016, the mobile bomas enable villagers to group their cattle in one big kraal set up in a maize field for a brief period with a dual goal of collecting manure and providing security for livestock against wild animals such as lions.

The mobile bomas rotate among the villagers’ fields so that they can all benefit from the manure.

There are 411 people that are benefiting from the five mobile predator proof kraals that move around areas under chiefs Mvuthu and Shana.

Bongani Dlodlo, the VFWT community liaison officer, said the initiative has led to improved yields for villagers as their fields are provided with manure from the bomas cheaply and at the same time reducing the number of cattle killed by wild animals.

Dlodlo said the project has also resulted in a reduction in wildlife crimes in the area as villagers no longer feel compelled to hunt for wild animals because they no longer interfere with their lives.

“Our projects mainly cover the Hwange West constituency and we focus on human-wildlife conflict occurring in Chidobe, Mpumelelo and Chikandakubi villages and part of Ndimankule areas, which are on the edge of wildlife areas,” he said.

“Problem animals in these areas are those that get chased away from their families.

“For instance if a young lion is chased from its pride, especially the young males, they disperse into the communities to prey on easy targets and stray elephant bulls also have the same tendency, especially between January and June as they compete for food during the cropping season.”

He said the bomas were one of the most successful initiatives to prevent human wildlife conflicts, which involved the villagers.

“Within these hotspots, which also include Jambezi and Kachechete, in each ward, we have mobile bomas made up of canvas sheeting and these bomas are used to protect livestock at night,” Dlodlo added.

“They are simple kraals, but they are different from the traditional ones made of logs.

“The bomas benefit the villagers in the sense that they help fertilise the soils and they are easy to move around from one field to another and the yield from these bomas during the cropping season is three times higher than a field that is not fertilised.”

VFWT also employed five “community guardians” who are equipped with skills to track problem animals, use chilli guns and vuvuzelas to drive problem animals away without harming them.

According to the organisation’s 2020 annual report, innovations such as the employment of community guardians and the use of predator-proof kraals saw the number of livestock killed by lions in the area going down to 71 compared to 88 the previous year.

VFWT’s wildlife and research manager Roger Parry said communities in Hwange now understood that they had a role to play in conservation efforts.

“When we are talking about the issue of human-wildlife conflicts and the guardians, historically most of these communities believe that the wildlife belongs to somebody else where they will say I am going to leave my cattle and parks (rangers) will have to come and look after their wild animals,” Parry said.

“But with the community guardians, there has been a change in paradigms where people now think of becoming more responsible in that conflict.

“We have held meetings where communities are no longer talking of killing these animals or having them removed, but instead they need better solutions to live with these animals and they are thinking about the next generation.”

He said VFWT initiatives were equipping the villagers with tools to deal with problem animals without harming them.

“The guardians get the communities to become more responsible without relying on someone else coming through.”

Other initiatives include discouraging farmers from putting bells on their cattle, which VFWT says makes it easy for the livestock to be tracked down by lions.

Parry said research had shown that 75% of cattle that were killed by lions had bells.

Human –wildlife conflicts are becoming prevalent in Zimbabwe due to more frequent droughts that force wild animals to move from protected areas into villages in search of food and water.

Over 100 people have already died this year in the country after they were attacked by wild animals.