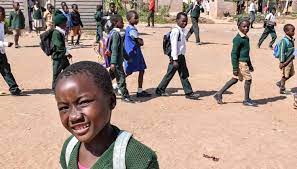 EDUCATION is the most solid foundation that anyone can have, and it is an important ingredient in any government’s plans to improve the socio-economic development of its country.

To ensure local communities receive the maximum benefit from the mine’s presence, for instance, firms should partner government, traditional leaders and various organisations to help improve the quality of education and expand career prospects for local youth.

Efforts should be made to improve the livelihoods of the communities by framing a broader vision of how corporate support can have the most impact, and in this case improve the education standards and advance literacy levels.

The corporate world should step up campaigns to end poverty, fight inequality and tackle climate change, while ensuring that no one is left behind in communities where they operate.

Also, dialogue with the government, civil society, communities and other stakeholders plays a key role in enhancing access to quality education for local people.

Through education improvement programmes, the quality of education, measured through home-developed literacy and numeracy assessments, should rise significantly.

Corporate world-supported schools fair quite better in literacy than schools not supported. The support also helps in reducing differences between town school and rural schools in spelling, reading and writing abilities.

Under school improvement programmes, the corporate world can also support the continuous professional development programme, whereby school heads and teachers in various schools are provided with training on modern teaching methods, including action plans for implementation.

Mining firms can also partner a consortium of civil society organisations, various governmental departments and the community to come up with interventions to help local people access quality education in a way that aligns with their requirements.

Improving access to quality education needs a holistic approach, and this has to be done by investing at all levels of the education system, from primary and secondary through to university and technical training.

Corporates should continue providing an array of opportunities to young people ranging from scholarships at higher learning institutions to community skills training which includes, local business development, conservation farming as well as empowerment through sport.

Firms can also donate a consignment of books to government as part of the education development programme.

Quality education is the key to success and firms should be passionate about creating access to better schools for children in local communities.

Access to quality education has long been a near-insurmountable obstacle for low-income households — severely limiting their chances of escaping poverty through entrepreneurship or decent employment.

This has been exacerbated by the COVID-19 outbreak, with micro, small and medium enterprises — typically the main source of revenue for low-income households — bearing the brunt of the negative economic impact.–First Quantum

ENVIRONMENTAL sub-committees from Bulilima district have been encouraged to safeguard wildlife resources in their locality.

Speaking at a capacity building workshop organised by Habakkuk Trust in collaboration with the Bulilima Rural District Council, the Zimbabwe Parks and Wildlife Management Authority (ZimParks) official Bekimpilo Mbewe urged environmental sub-committee members to be ardent stewards over wildlife living in their proximity.

Mbewe further emphasised on the pillars of wildlife management which are conservation, protection and sustainable utilisation.

“As environmental sub-committees you have a huge responsibility in wildlife management especially in the face of human-wildlife conflict, hence the need to always observe these for pillars,” stated Mbewe.

Bulilima district is prone to human-wildlife conflict due to an overlap between settlements and wildlife habitats.

Participants at the workshop raised concerns over wildlife invasions that have since become a threat to livelihoods and food production.

Dangerous animals such as elephants are roaming villages, decimating crops and posing a serious threat to humans and livestock.

He further encouraged participants to cascade information on protection and conservation of wildlife resources to their communities.–Habakkuk Trust

TWO weeks ago, the Zimbabwe Election Support Network (Zesn) hosted a Twitter space discussion on the topic Election Monitoring and Observation: Impact on the Integrity of Electoral Processes in Zimbabwe and the Region on June 16, 2022.

The meeting focused on assessing the effectiveness of election monitoring and observation of electoral processes in Zimbabwe and the African region.

It also looked at establishing gaps in the legal, administrative and political framework proffering recommendations for the improvement of the conduct of election monitoring and observation in Zimbabwe and the region.

There is a difference between election observation and monitoring, and the two processes have different mandates. Although observers can draw attention to issues arising from the electoral process, they generally have a limited mandate in the exercise.

Election monitoring, however, involves the authority to observe an election process and to intervene in that process if relevant laws or standard procedures are being violated or ignored.

Both election observation and monitoring can deter malpractices and build stakeholders’ confidence in electoral processes, ultimately contributing to the democratic credibility and universal acceptability of elections.

The effectiveness of observer missions’ reports is really dependent on context and the character of the government of the day in a given country. It is rather unfortunate that in some cases, citizens do not fully comprehend the limitations of observers and in some instances, end up attacking observers as ineffective.

Although monitors and observers can collect information, analyse and have a vested interest in the exercise, only monitors can intervene in the process.

Observers can only “hope” that their reports will have an effect on the results of the process and for policy considerations. Hindrances to the work of observers and monitors in most countries is usually caused by limited technologies as well as misinformation and disinformation by stakeholders in the process.

For electoral monitoring and observation to be effective, the impartiality of the election management body is paramount.

Effective political party monitoring is a key factor to consider in monitoring election processes, a competent, effective and impartial electoral complaints handling system as well as the involvement of a multiplicity of actors in the electoral process.

Situations similar to what happened in Malawi, where an election observation was viewed as credible, but later overturned, usually leads to loss of legitimacy in the independent observation process as well as lack of a genuine and meaningful citizen participation in observation.

Election observation has evolved over the years and there are standards, guidelines and observer codes of conduct that have also emerged to regulate the observers.–Zesn