Mighty Warriors score crucial away goal despite loss to Ghana 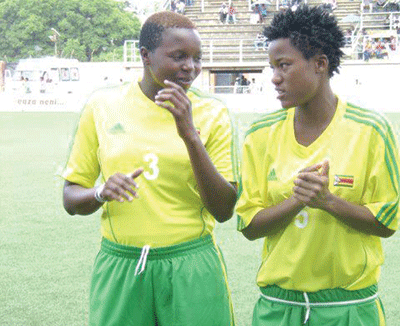 The Ghana Black Queens recorded a narrow 2-1 win over Zimbabwe in the 2015 All-Africa Games final qualifying round first leg match in Accra on Saturday.

ACCRA – The Ghana Black Queens recorded a narrow 2-1 win over Zimbabwe in the 2015 All-Africa Games final qualifying round first leg match in Accra on Saturday.

Agnes Aduako and Samira Suleman scored for Ghana before Emmaculate Msipa pulled one back for the Mighty Warriors of Zimbabwe.

In the 27th minute, Therese Aimee Ntene from Cameroon signalled for a penalty after Diana Ankomah was brought down in the box.

Aduako converted from the spot to give the Black Queens the opener as the first half ended 1-0 in favour of Ghana.

Coach Yussif Bassigi introduced Samira Suleman into the game in the second half and the substitute wasted no time as she scored Ghana’s second goal of the day just five minutes after coming on.

The pacy Hasaacas women’s forward picked the ball on the left side of the pitch and ran past the Zimbabwean defenders before she intelligently slotted the ball past Chido Dzingirai in post for Zimbabwe.

The Zimbabweans, however, pulled one back after captain Msipa’s 72nd minute free-kick managed to beat Ghana goalie Fafali Dumashi.

The return leg of the match will be played on April 4 in Harare.