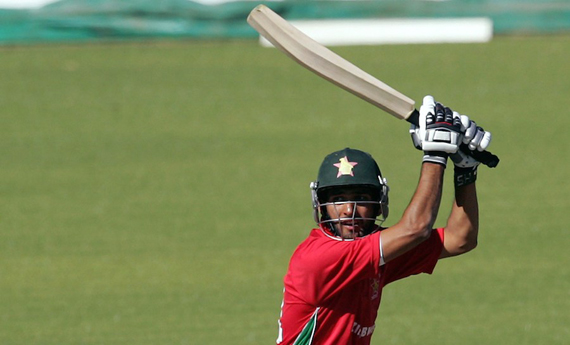 For the second match in a row, Zimbabwe opted to field, but were set up a slightly difficult target of 257 compared to the first ODI.

With no Vusi Sibanda, Raza opened the batting with Hamilton Masakadza and set the tone of the innings with a boundary of the first ball of the second over.

He bettered it in the third over with consecutive fours of Shapoor Zadran’s first two deliveries before ramping the scoring rate from the ninth over onwards.

Zimbabwe had moved to 42 from the first eight, but Raza smashed Dawlat Zadran for two sixes and a four in an over that leaked 21 runs. He slowed down a touch thereafter, reaching his half-century in 54 balls.

Raza scored the next fifty off 45 balls to reach his maiden century in the 31st over.

Masakadza, meanwhile, had patiently added 83 runs off 93 balls to help the team motor to 192 without loss.

Two boundaries in the next over from Raza took Zimbabwe past 200 — the first double-century opening-stand for Zimbabwe. By the time Masakadza was dismissed, seven short of his century, the stand had swelled to 224 — the best for any wicket for Zimbabwe.

The home side continued to saunter and overhauled the target with more than six overs to spare, the only blip being the loss for Raza of a ball before the win was achieved.

Earlier, Ghani had single-handedly shored up Afghanistan’s innings with a mature innings.

He received repeated support from the other batsmen, but none lasted long enough with him to threaten Zimbabwe.

Take out Ghani’s 118 off 143 deliveries — the joint equal for the highest score by an Afghanistan batsman — and the highest individual score was Gulbadin Naib’s 23. Raza was successful with the ball too, picking up two crucial wickets in his five-over spell.