Colombia finished top of Group C to set up a last-16 tie against Uruguay after beating Japan, who were eliminated.

Colombia finished top of Group C to set up a last-16 tie against Uruguay after beating Japan, who were eliminated. 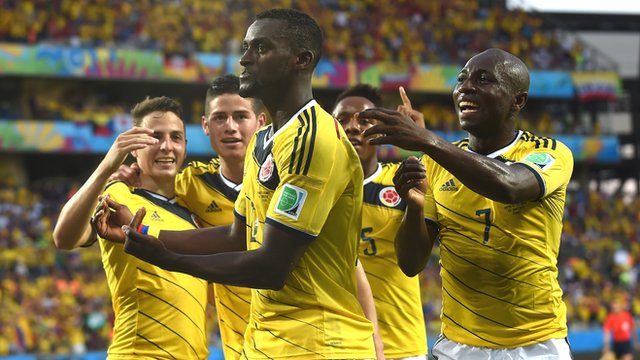 Japan needed a win to stand a chance of progressing but went behind when Juan Cuadrado scored a penalty following Yasuyuki Konno’s foul on Adrian Ramos.

Martinez cut inside and slotted in a left-foot shot before James Rodriguez’s exquisite chip wrapped up the win.

Colombia used their third goal as the signal to bring on 43-year-old keeper Faryd Mondragon, whose introduction saw him become the oldest player at a World Cup finals as he broke Cameroon forward Roger Milla’s record.

Faryd Mondragon, 43, made his first competitive appearance in nine years

Los Cafeteros, who went into the game having already qualified for the knockout stages for the first time since 1990, used the game as an opportunity to rest key players but still registered a third straight win.

Japan manager Alberto Zaccheroni had recalled playmaker Shinji Kagawa in an attacking line-up and, despite Colombia making eight changes, his side quickly found themselves behind.

Konno tripped Ramos and winger Cuadrado, who had assisted three of his side’s five goals in Brazil, drilled in the subsequent spot-kick.

Japan went close when Kagawa sidestepped Eder Balanta and had a low shot turned around the post by keeper David Ospina before Colombia should have extended their lead.

Ramos squared the ball across the box for an unmarked Martinez, only for the striker to side-foot wide.