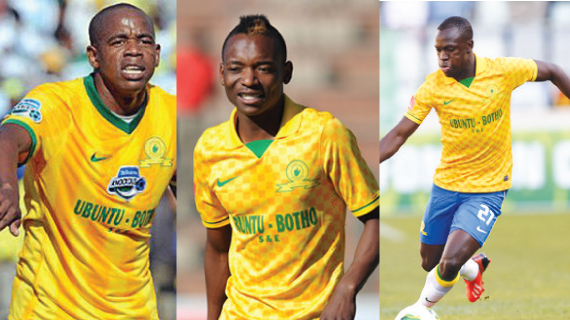 IT WAS a night to remember for Peter Ndlovu, Esrom Nyandoro, Cuthberth Malajila and Khama Billiat as Mamelodi Sundowns finally clinched the Absa Premier Soccer League (PSL) title in South Africa on Tuesday with a comprehensive 3-0 destruction of Supersport United.

Mamelodi Sundowns will walk away with the R10 million in prize money. In addition, Sundowns also won PSL Quarter 1, 3 and 4 — a total of R4,5 million.

The PSL trophy together with Q3 and 4 prize money will be handed to Mamelodi Sundowns, also known as the Brazilians or Bafana beStyle of Kabo Yellow, at their last fixture of the 2013 to 2014 season on Saturday at the Harry Gwala Stadium.

“There is no secret about the bonus structure at Sundowns. They will be handsomely rewarded for winning the league,” a club official told Kick Off on Sunday.

For Malajila (28) it was signing off a debut season with the third goal that put the icing on the cake for Pitso Mosimane, who rumbled on and on about the presence of the former Chapungu striker and Warriors legend Peter Ndlovu.

Ndlovu (41) is now the team manager at Sundowns while Nyandoro has completed a decade with Sundowns. Malajila and Billiat arrived from Maritzburg United and Ajax Cape Town at the start of the season.

From this Zimbabwean quartet, Nyandoro (34) is the most decorated of them all. He won the league title with AmaZulu in Zimbabwe in 2003, moved to the Brazilians the following season and was named the Jet rookie of the year on his debut season.

He won his first league title in 2005 to 2006, the second the following season and Tuesday’s was the third, in addition to a host of monthly club awards. He also bagged the Charity Spectacular in 2004 — the same year Ndlovu joined him from the United Kingdom in 2005 and 2006.

For Malajila and Billiat (24), this is the first league title. Speaking after the win, Mosimane said the changes in both playing personnel and management team were the reason behind Sundowns’ success.

“It was difficult for me. I sat down with the president and I said to him we need to make lot of changes.

“I gave the vision to the board. The challenge was ‘coach, are we gonna bring in many players again?’

“I said I don’t know before who was buying and what he was buying. If you entrust me with these things and trust me, I must make changes. We needed a different crop of players to win the league.

“We had to make 13 changes and we brought in 13 players. We had to let others go. We needed the changes.

“I wouldn’t go the way things happened in the past seven years and I had support from the board.”