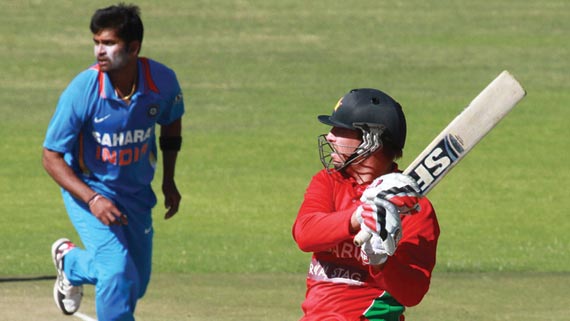 LEG spinner Tafadzwa Kamungozi has bounced back into the national cricket team squad for the first time since 2006 after being included in Zimbabwe’s 15-member squad for next month’s International Cricket Council (ICC) World Twenty20 (T20) competition in Bangladesh.

LEG spinner Tafadzwa Kamungozi has bounced back into the national cricket team squad for the first time since 2006 after being included in Zimbabwe’s 15-member squad for next month’s International Cricket Council (ICC) World Twenty20 (T20) competition in Bangladesh. DANIEL NHAKANISO SPORTS REPORTER

Zimbabwe were the only team that had failed to submit their squads to the ICC before the cut-off date of February 16.

The 26-year-old Southern Rocks player has played four one-day internationals for Zimbabwe, but is yet to represent the country in the shortest version of the game.

Kamungozi, who made his international debut against South Africa in Potchefstroom in September 2006, was included in the squad after excelling in the national team trials held at Harare Sports Club this week.

He comes into the squad at the expense of Tinotenda Mutombodzi and is one of the three specialist spinners in the side together with Prosper Utseya and Natsai Mushangwe.

Middle order batsman Timycen Maruma, who struggled to make an impact in his last outings for Zimbabwe against India and Pakistan also retained his place in the side after doing well during the inter-squad competition which ran from Monday to Wednesday.

“Tafadzwa Kamungozi has bounced back after eight years. He has done very well consistently over the past two seasons and has been knocking on the national teams doors. He bowled well during the tournament and we feel his play will suit the Bangladesh conditions,” said Zimbabwe Cricket (ZC) convener of selectors, Givemore Makoni on Kamungozi’s inclusion.

“We wanted to pick a squad that can bat up to number seven and Timycen Maruma is that extra batsman that we are looking for. He really put his hand up in the trials and was hitting the ball very well.”

The ICC World T20 will see Zimbabwe first play in the preliminary stage to qualify to the Super 10 phase. The Andy Waller-coached side needs to finish top of group B comprising Ireland, Netherlands and the United Arab Emirates to progress to the next phase.

Zimbabwe open their campaign against Ireland on March 17 ahead of their clash with the Netherlands two days later before completing preliminary group stage action against United Arab Emirates on March 21.

The cricket-starved Zimbabwe team has an opportunity to fine-tune their preparations and adjust to the conditions in Bangladesh during their two warm-up matches against Hong Kong and Afghanistan on March 12 and 14 respectively.