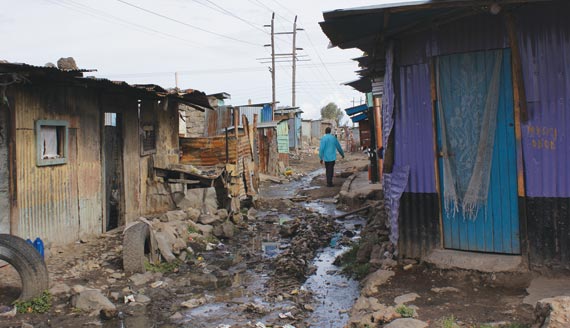 But these development plans could also benefit the poor if governments are responsive to the needs of their citizens, argue analysts.

The implementation of these development plans within existing cities is having major exclusionary effects on vulnerable low-income groups through evictions and relocations, states the journal article African urban fantasies: dreams or nightmares?.

This is because some of the informal settlements — where most of Africa’s urban poor live — are on lands attractive to property developers.

“In the competition for well-located urban land, the poor will inevitably lose out and be pushed to the edge of the cities, far away from jobs and public facilities. The governments will focus public investment on infrastructure for the new projects and this will drain resources away from providing services to low-income areas,” Vanessa Watson, the author of the article said.

“With the majority of urban populations living in deep poverty and with minimal urban services, the most likely outcome of these fantasy plans is a steady worsening of the marginalisation and inequalities that already beset these cities,” added Watson, who works with the African Centre for Cities (ACC) programme at the University of Cape Town.

Indeed, the Humanitarian Policy Group in a recent report cited “development policies and projects and land grabbing as some of the drivers of urban displacement”.

Countries such as Angola, the Democratic Republic of Congo, Ghana, Kenya, Nigeria, Rwanda and Tanzania have partnered with the private sectors to develop master plans for their cities.

In Kenya, there are plans to build Konza and Tatu cities, which would house some 100 000 residents and include business parks and shopping malls. The government is priming the proposed Konza City to be Africa’s Silicon Valley, part of its wider efforts to make Nairobi a regional information technology hub.

Advocates of Tanzania’s proposed Kigamboni City, near the commercial capital Dar es Salaam, say it will be an ultra-modern urban centre whose facilities will compete with those in Dubai, Hong Kong and Kuala Lumpur.

Instead of heightening social inequality, the establishment of alternative cities may offer some pro-poor benefits, argues Albert Nyange, an urban planning lecturer at the University of Nairobi. He noted that in Kenya, such developments have spurred government action in transport infrastructure development.

“Cities that are planned for the majority of the population directly contribute to improved quality of life of the poor.”

“Investment in an efficient transport system is in itself pro-poor because it means transport becomes affordable. An efficient railway system will ensure the cost of commodities reduces, and [there are] many other benefits that come in housing development, such as jobs,” said Nyange.

“What is needed is not bashing of these plans, but engagement with city authorities to provide incentives to those who can provide products, such as cheap, but decent housing targeting the low-income groups.”

Nyange added that these new cities could provide a “solution to ease the pressure off the old cities” and could, if done right, “provide a sustainable solution to rapid urbanization”.

Blaming the chaotic nature of African cities such as Nairobi on rapid urbanisation and poor planning, he said: “The new development initiatives provide an opportunity to replan and reshape African cities to cope with urbanisation in some way and create order that is currently lacking.”

Most of Nairobi’s population lives in the slums. The Kibera slum, which is located just a few kilometres from the city centre, is home to some 500 000 to 700 000 people living at densities of over 2 000 per hectare, according to UN-HABITAT.

While reshaping cities will enhance the provision of services such as piped water and electricity, vulnerable slum residents and those with disabilities must be taken into consideration, added Tom Odongo, the head of lands, housing and physical planning at the Nairobi county government.

“Cities that are planned for the majority of the population directly contribute to improved quality of life of the poor.”

According to Tuts, what is key in planning these cities is “optimising density not necessarily maximising it” to ensure that rapidly urbanising countries are able to meet the needs of their growing urban populations.

“But density alone is not the answer. We also need to minimise zoning, take advantage of mixed-land use and invest in our public space.”

“The poor will require a different approach to service provision which does not impose major costs. These may include decentralised and community-based service approaches, different levels of service and some subsidisation,” she said.

But Watson argues that while Africa’s large cities have been labelled as the last frontier for property development and are currently being “revisioned in the image of cities such as Dubai, Shanghai and Singapore, the reality in all of these cities stands in stark contrast to the glass-box towers, manicured lawns and water features on developers’ and architects’ websites”.

David Satterthwaite, a senior fellow with the human settlements group at the International Institute for Environment and Development, notes: “The plans (Watson talks about) focus government attention and budgets on very expensive high-tech initiatives that, if built, will primarily serve an elite minority”.

However, some cities have used local political processes to expand the reach of basic services for low-income groups.

“These include many city governments that have learnt to work with their local organisations and federations of slum/shack dwellers in Jinja (Uganda), Harare (Zimbabwe) and many urban centres in Namibia and South Africa.”

What African cities need, said Satterthwaite, are “competent and accountable local governments that respond to the needs and priorities of their citizens.”