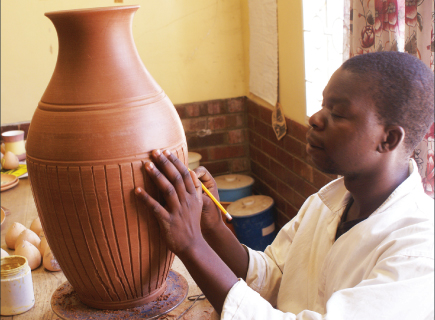 MZILIKAZI Arts and Craft Centre will be celebrating its golden jubilee in November as it reflects on achievements over the past 50 years.

MZILIKAZI Arts and Craft Centre will be celebrating its golden jubilee in November as it reflects on achievements over the past 50 years.

The centre, which was named after the legendary Ndebele warrior king and nation builder, King Mzilikazi Khumalo, was established in 1963, with the sole aim of providing a community service by empowering the youth through affordable parallel education.

“We have started our preparations for the golden jubilee celebrations that will hopefully be held in November. We have started inviting interested stakeholders,” Philimon Musoni, the principal of Mzilikazi Arts and Craft School told Southern Eye.

The centre that has over the years, become a harbinger of light for many young and upcoming artists, was a brainchild of a Lambarth, who worked on its establishment with the Bulawayo City Council.

“The centre was established by the city council in 1963, but there was a Lambarth who was very instrumental in making the school a reality. The ultimate motive, vision and reason behind its establishment was to help the youth in the city by equipping them with art knowledge and enhancing their talents so as to create self-employment and help eradicate poverty,” Musoni explained.

The school is considered a mecca of art majors in five art disciplines, namely Fine Art, Pottery, Wood and Stone Sculpture, and Ceramics and Metal Sculpture.

Furthermore, the school also imparts into students with foundation skills in business in order to enable the students to excel in their artistic journey and become masters of their own destiny.

“Our students are taught basics of entrepreneurship before they graduate, Empretec has been conducting the training for us and we also got some support from the International Labour Organisation. We hope that they will continue to assist in this regard,” he said.

Since its inception, half a century ago, the school has certified over 2 100 students and has also seen the birth of some of the country’s most prominent artists such as the owner of Chapungu Crafts in Harare, Dominic Benhura, the National Art Gallery in Bulawayo regional director Vote Thebe, and the director of the School of Hospitality and Tourism in Bulawayo, Charles Msimanga.

In 2006, the Centre, together with five other projects, was incorporated into the newly-formed City of Kings Business Ventures, which is a Bulawayo City Council-owned company that came into existence as a result of the Local Government resolution to commercialise these entities.

The centre, like all other businesses in the country, was not spared by the economic meltdown of the last decade, but has been fortunate to access assistance from humanitarian organisations that have been funding the education of most of its students.

“On children or aspiring artists from poor backgrounds, the centre applies for bursaries from SOS and the National Art Gallery and also through the ministry, seeking the help of donors such as the International Organisation for Migration and the International Labour Organisation,” Musoni added.

He said this had, to an extent, managed to address the staff’s main worry of low student intake, as many parents cannot afford to pay the stipulated fees for their children.

He decried the commercialisation of the centre, citing it as the major cause of the decline in enrolment saying the fee structure has been raised over the years as the school has to raise funds to pay its staff compliment and meet other expenses because it does not sell a lot of its merchandise due to the flooding of the market by cheap Chinese products.

“As I said, the school was originally meant to be a community service, but this changed as it was commercialised under the City of Kings Ventures, which means that the centre is expected to meet all its expenses and also make a profit,” Musoni said.

“This has resulted in the school fees becoming too exorbitant for most aspiring artists.” he added.