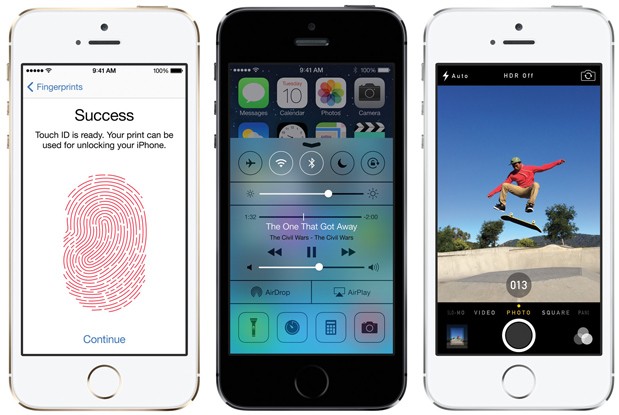 Ladies and gentleman, the moment you’ve all been waiting for. As expected, this afternoon’s day-brightening news (or part of it, at least) arrived in the form of a brand-new handset.

CEO Tim Cook took to the stage at Apple HQ to introduce the world to the iPhone 5s (lowercase “s,” mind), the second of two handsets announced.

The new phone follows the number- / letter-naming scheme set in place way back in twenty ‘o nine with the introduction of the 3GS and carried on with 2011’s 4S.

As with those handsets, the new device’s name implies that this round is something of an iterative update to last year’s iPhone 5.

According to Phil Schiller, the handset is “the most forward-thinking phone we’ve ever created.” As expected, it’s set to arrive in three colors: black, silver and gold.

The 5s is crafted in high-grade aluminum with chamfered edges.

What the the “s” stand for? Well, inside, you’ll find a 64-bit A7 processor that features twice the number of transistors as its predecessor, clocking in at more than 1 billion, according to Schiller — the CPU and GPU, meanwhile, promise speeds twice as fast.

There’s OpenGL ES 3.0 on board, but the next-gen handset still promises, thankfully, to remain compatible with the 32-bit apps of yesteryear.

The 5s also rocks the new M7, which monitors motion data in real-time, with help from the accelerometer, gyroscope and compass — a feature that’ll work nicely with fitness apps like the new Nike+ Move.

What of that ever-present issue of battery life?

Apple’s promising a full 10 hours of 3G talk time and LTE browsing. The phone should also stay alive for 40 hours of music playback for all of your live Grateful Dead material and 250 hours on standby.

Imaging, not surprisingly, is getting some love on this refresh as well.

The camera features a sensor that’s 15 percent larger than the one on its predecessor as well as a five-element, Apple-designed lens with an f/2.2 aperture.

Also on board is autofocusing matrix metering, so you can leave the arty blurring to Instagram. Even the flash is getting an upgrade this time out.

Apple’s offering up “True Tone,” which features 1,000 variations of color temperatures to help you get things like flesh tones just right.