Gumbo opens up on Bosso 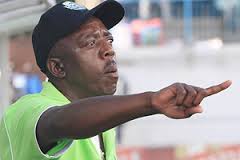 FORMER Warriors gaffer Rahman Gumbo says he is not taking any top coaching post anytime soon as he is on sabbatical.

FORMER Warriors gaffer Rahman Gumbo says he is not taking any top coaching post anytime soon as he is on sabbatical, quashing rumours linking him with a return to the Premier Soccer League to coach Hwange.

Gumbo, who is technical director at Zifa Southern Region Division One outfit Bulawayo Chiefs, on Sunday said he was enjoying himself at Chiefs and was not interested in taking up a coaching job in the premiership.

There has been wide speculation that Gumbo could be returning to Highlanders with the latest being a move to relegation-fighting Hwange, but the celebrated Zimbabwe coach questioned where that was coming from and said no one had cared to find details from him.

“I’m not interested in taking a coaching job at least for one year. I am technical director at Bulawayo Chiefs. Chiefs is a project starting from the grassroots and we want to promote youngsters and take them somewhere to South Africa and Europe. I’m enjoying myself and happy with what I am doing now. I’m not desperate to take up any coaching position and am not going to Highlanders,” Gumbo said.

Quizzed on what he would do if Chiefs — favourites for promotion to the Premier Soccer League — actually did gain promotion, Gumbo said he would get experienced coaches to see the project through.

“Our chances of getting promotion into the Premiership are bright and if we are promoted I might get experienced coaches to look after the project,” Gumbo said.

The veteran mentor started coaching the new Division One side early last month when head coach Thulani Sibanda was put in charge of the juniors. The latter has since opted out to join the Methembe “Mayor” Ndlovu-owned Bantu Rovers.

Gumbo started his coaching career with Bulawayo Wanderers, a Division Two side.

He then went on to assist Madinda Ndlovu at Highlanders in 1997 and took over as head coach to win the championship the following year and in 1999.

After leaving Bosso, Gumbo joined clubs in Harare that included Sporting Lions, Motor Action and Caps United before going to Malawi where he won the championship with MTL Wanderers in 2006. The veteran coach crossed over to Botswana where he won two league titles with Township Rollers.

He came back to Zimbabwe and joined FC Platinum following the death of the Benjamin Moyo in 2011 and took the platinum miners to position two in the Castle Lager Premiership.

Under his tutelage, Platinum participated in last year’s Caf Africa Champions League before falling to Sudan’s El-Merreikh in the first round.

Gumbo was appointed Warriors coach last year and had a short dance with the national team following their failure to qualify for this year’s Africa Nations Cup finals.

The same year that he left FC Platinum, he quit the Warriors before resurfacing at Bulawayo Chiefs.