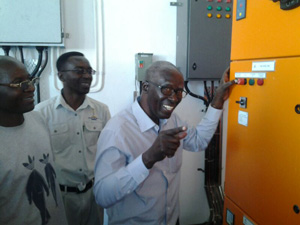 THE Mtshabezi-Umzingwane pipeline is complete and has started pumping 17 megalitres of water to Bulawayo after several false starts and allegations of sabotage.

THE Mtshabezi-Umzingwane pipeline is complete and has started pumping 17 megalitres of water to Bulawayo after several false starts and allegations of sabotage.

Water Resources Development and Management minister Samuel Sipepa Nkomo in the company of Bulawayo City Council officials yesterday, switched on power at the project’s pump house. The project was meant to be commissioned last Friday, but had to be postponed after alleged sabotage of electric cables leading to the pump house, by suspected Zanu PF activists.

“This is a great day for Bulawayo, the Ministry of Water and for me personally,” Sipepa Nkomo said. “At last the project is complete and is supplying 17 megalitres to Bulawayo on a daily basis.”

He said he was switching on the pump house for the people of Bulawayo, but commissioning would be conducted after elections. I have had to do this quietly to avoid cases of sabotage,” Sipepa Nkomo explained. “The project is, meant to benefit the people and is not for politicking.

“This is not a Zanu PF project, neither is it an MDC-T one. I am working for the government and not a political party.”

The minister said the reason Zanu PF had failed in the past was that they blurred the lines between the government and party business. “(Bulawayo governor) Cain Mathema was attacking me saying I was a celebrated failure, but what did he do when he was deputy minister of Water?” he asked.

“We are quite happy,” he said. “This is a wonderful day because we are decommissioning Inyankuni Dam, probably in the next week or two,” he added. Mthunzi said the supply of water from Mtshabezi-Umzingwane pipeline project did not translate to the suspension of the water shedding regime.

“Inyankuni was supplying 25 megalitres of water, but Mtshabezi-Umzingwane will supply 17,” he explained.

“However, we are guaranteed constant supply of water from the pipeline project until the next season.” The company contracted to electrify the project, ACR Controls, also assured Nkomo that the electricity problem had been solved.