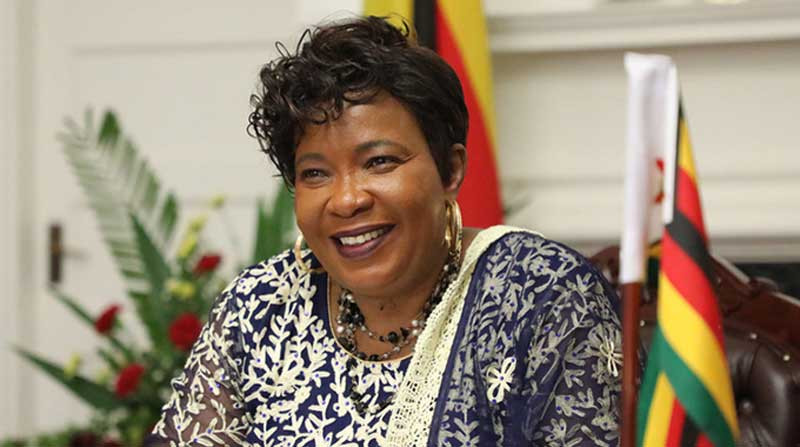 PRESIDENT Emmerson Mnangagwa was sworn in as interim leader during a colourful ceremony at the National Sports Stadium in Harare, after the ouster of the late former President Robert Mugabe in a coup more than a week before.

Seated on Mnangagwa's side was his wife, Auxillia , wearing a white costume and some expensive-looking gold jewellery. The couple looked on as the ruling Zanu PF party supporters and Mugabe’s critics cheered the ushering in of a Second Republic, new Zimbabwe and new dispensation.

At this point, Auxillia, a former spy from the Central Intelligence Organisation and a former member of Parliament who married Mnangagwa in 1984, was seen by many Zimbabweans as a “loving, peaceful and caring woman” popularly known as Amai. This Shona name translates to mother.

After the swearing-in ceremony, Auxillia focused on her philanthropic work supporting and uplifting marginalised communities, including women, young girls and people with disabilities.

However, nearly five years later, Auxillia has gone into overdrive and seems to be following in the path of her predecessor, Grace Mugabe, nicknamed “Gucci Grace” for her lavish shopping sprees in New York, Paris and Singapore.

Auxillia's philanthropic work is now heavily funded by the State, she takes up space in the State-owned newspaper Herald and State-controlled public broadcaster ZBC-TV, and she officiates at government’s official business.

Zimbabwean journalist and writer Douglas Rogers, in his book Mugabe: Two Weeks and journalist Geoffrey Nyarota with his Graceless Fall of Robert Mugabe: The End of a Dictator’s Reign, capture the story of Grace.

The shy receptionist Grace, who officially married Mugabe in 1996, was conferred a controversial Doctorate in Sociology by the University of Zimbabwe at a time her ally Jonathan Moyo was Higher Education minister.

Reports emerged that Grace did not defend her thesis and did not spend enough time required for one to complete a doctorate, and the conferment was challenged in court. Grace rose to power that same year when she got herself heavily involved in Zanu-PF’s shameful politics and State affairs.

She influenced her husband Mugabe to appoint young politicians from her faction, Generation 40, and even summoned government ministers and attended hearings.

Grace had Joice Mujuru and seven Cabinet ministers aligned to the war veteran, fired by Mugabe in December 2014 before turning on Mnangagwa in a fierce battle that ended in November 2017 — a few weeks after Mugabe had sacked his deputy.

She used Zanu-PF gatherings to rant against her opponents, including military generals accusing them of working hand-in-hand with Mnangagwa to topple the long-time ruler and Africa’s strongman.

In 2018, Mnangagwa and his Lacoste faction, who accused Grace of taking over government functions before the coup, warned his wife, Auxillia, from interfering with his government official duties.

Since then, however, things have changed. In the Herald, a team of reporters seems to have become Auxillia’s personal reporters. They cover her philanthropic work and people from the “Office of the First Lady” apparently have the final say on what the editors publish.

Kudakwashe Munemo, a political analyst, told IPS that there is a lack of transparency on sources of funds channelled to Auxillia’s philanthropic work. “As a country, we do not have an official office of the spouse of whoever is elected President. That distinction is key, for we ought not to have a conflation of programmes conducted by the President’s spouse and those by the government, especially where State resources are involved at the expense of official government business,” he said.

Maxwell Saungweme, a political analyst, said the problem Zimbabwe was facing was that there was no clear distinction between Mnangagwa’s family, the ruling party, Zanu-PF and State business. “What she is doing is part of the rot of party-State-military conflation and, in this case, first family-State conflation,” he said.

“She is certainly not learning from Grace and other first ladies elsewhere in Africa who did not keep to their lane while their husbands did government and State business. Everything she is trying to do is wrong.”

Auxillia, who travels around the country using blue lights security details and sometimes with road-clearing and traffic-blocking police motorcycles, a privilege enjoyed by few top government officials, has been conferred various titles from ambassadors to patrons of some State institutions.

In May, Auxillia was conferred a Doctor of Philosophy (PhD) (Honoris Causa) degree at GD Goenka University in Gurugram Haryana, India, in recognition of her philanthropic work. Also, in May, Auxillia officially opened the African Elephant Conference, held in Hwange, a resort town 335 kilometres from Zimbabwe’s second-largest city Bulawayo, ahead of the 2022 Convention on International Trade in Endangered Species.

Even though Auxillia is Environment, Climate, Tourism and Hospitality Industry patron, political analysts say she took over a government function as the conference was an inter-State meeting attended by ministers from 14 African countries.

“Roles of First Ladies or spouses of leaders vary across political jurisdictions, with some preferring them to remain in the background while others allow a more active role,” Vivid Gwede, a political analyst, told IPS.

“Where they are allowed to play an active role, this does not clash or compete with officials and ministers of government being usually ceremonial.”

He said in Zimbabwe an active first lady easily overstepped the boundaries and caused problems.

“This is apart from questions of transparency and accountability in the use of public resources,” said Gwede.

Rashweat Mukundu, a political analyst, said the “Office of the First Lady” should reflect the soft side of the President. “There is nothing wrong with Auxillia doing philanthropic work. What is of concern is to abuse that office for partisan politics. It could be political campaigning or any other office that excludes other groups. This is because the Office of the First Lady must be a unifying office. It must be an office that reflects the interests of the generality of citizens across the political divide,” he said.

He said accountability was an area that needed to be looked at to guarantee that State resources are not used for partisan politics.

“The challenge is that we have no mechanisms for accountability determining how much the State allocates to the Office of the First Lady. If the First Lady is energetic as the current First Lady is, it is an opportunity for the First Lady to do activities that unite us rather than those that divide us further,” he said.