It’s all over for Zimbabwe 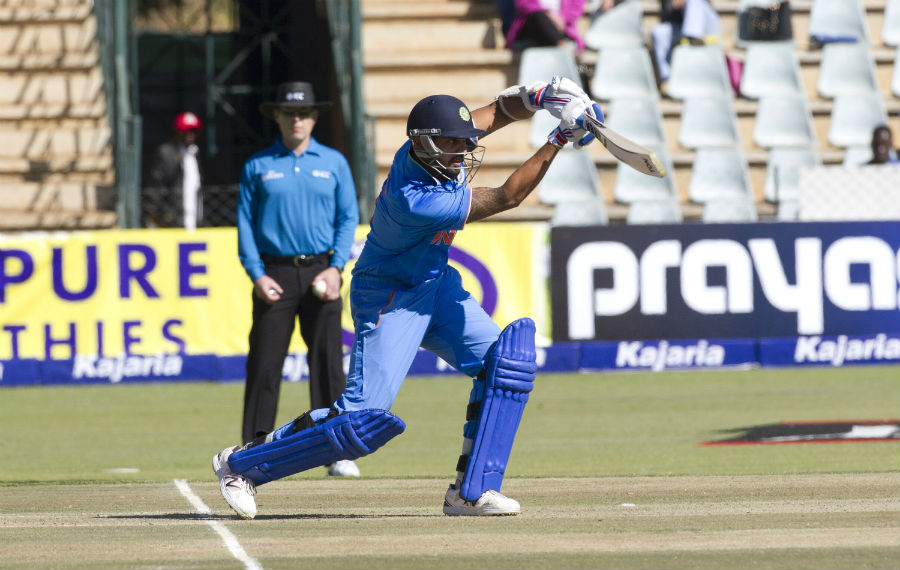 The approach of Rahane and Vijay looked dour, even dull at various points during their partnership, but the reasoning behind it was sound. The wisdom of it became apparent when Zimbabwe batted. At the 20-over mark, they were 79 for 3. India had been 78 for 0.

HARARE – On a slow Harare surface, India wrapped up the ODI series with a performance that was pragmatic if never thrilling. The batting struggled to get out of third gear, but an opening partnership of 112 between Ajinkya Rahane and M Vijay ensured the bowlers had a solid total to defend. A target of 272 may have produced a tighter contest against a stronger batting side, even on a pitch as sluggish as this one, but it was more than sufficient to beat this Zimbabwe side by a handy margin.

The approach of Rahane and Vijay looked dour, even dull at various points during their partnership, but the reasoning behind it was sound. The wisdom of it became apparent when Zimbabwe batted. At the 20-over mark, they were 79 for 3. India had been 78 for 0.

Chamu Chibhabha had batted like the India openers, playing the percentages and going after only the loose balls – such as when he cut and flicked a wayward Dhawal Kulkarni for three successive fours. Three other top-order batsmen had fallen to unwise shots – Vusi Sibanda had driven away from his body; Hamilton Masakadza and Elton Chigumbura had pushed hard at the ball outside off stump.

Bhuvneshwar Kumar had dismissed the latter two, finding a bit of away nibble and a bit of extra bounce. He hadn’t swung the ball as extravagantly as he sometimes does, and had mostly only moved it away from the right-handers, but he had probed insistently in the corridor in a first spell that produced figures of 6-3-19-2. He came back and took the last two wickets to finish with his second four-wicket haul in ODIs. The wicket of Masakadza was his 50th.

Needing close to six-and-a-half runs at the 20-over mark, Zimbabwe’s chase slowly fell away. Chibhabha went on to make 72, but there was little else that genuinely challenged India. The biggest partnerships of the innings were both worth 52 – the first between Chibhabha and Sean Williams when Zimbabwe needed to recover from 43 for 3; the second between Richmond Mutumbami and Graeme Cremer for the seventh wicket when the match was already lost, more or less.

After being sent in to bat, Rahane had expected early help for the fast bowlers. “There will be slight movement initially and if we take our time [the pitch] will be good to bat on,” he said.

The conditions partly explained India’s slow start, as perhaps did their fear of avoiding a collapse like the one that had left them 87 for 5 in the first ODI. But Rahane and Vijay also seemed to be finding their feet against the new ODI field regulations.

The removal of the batting Powerplay and the addition of an extra deep fielder in the last 10 overs have added more pressure on openers to score quickly, but it has become more difficult for them to do so, with catching fielders no longer mandatory and fewer gaps to pierce in the 30-yard circle in the first 10 overs.

Zimbabwe’s new-ball attack posed little threat to the well-being of India’s openers, but they were accurate, and with Rahane and Vijay showing no inclination to take risks, the scoring-rate remained sedate. Vijay kept playing good-looking drives and punches straight to off-side fielders: till the 10th over, he only scored one run on that side of the pitch.

Rahane was a little more brisk early on – he creamed Brian Vitori and Neville Madziva for three fours through the covers in the first seven overs, capitalising whenever he was given width – but he grew becalmed as his innings progressed. Having scored 18 off his first 21 balls, Rahane only scored 45 off his next 62.

After Chibhabha dismissed Rahane in the 26th over, finding his leading edge as he looked to work him across the line, Vijay and Ambati Rayudu gave the innings a bit of urgency. Rayudu whipped the legspinner Cremer wide of mid-on and hoicked Vitori to the midwicket boundary; Vijay lifted Chibhabha and Vitori for effortless sixes down the ground in successive overs.

The partnership gave India 47 off 45 balls, and the next one, between Rayudu and Manoj Tiwary, 44 off 51. India entered the last 10 with eight wickets in hand, but both set batsmen went within four balls of each other.

Rayudu had been lucky to survive so long, having been given not-out to a very good lbw shout from Chibhabha on 16 and dropped at long-on off Masakadza on 26. In the 41st over, he came down the track to Sikandar Raza and holed out at deep midwicket. In the next over, Tiwary flicked Donald Tiripano straight to short fine leg.

With seven-and-a-half overs left to play, Robin Uthappa, Stuart Binny and Kedar Jadhav found the boundary with enough frequency to ensure India crossed 250 with wind in their sails, but the momentum fizzled out right at the end, with the last two overs producing only 15 runs for the loss of three wickets.