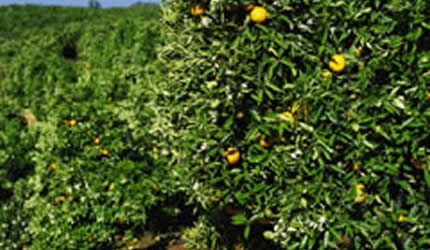 ONE of Beitbridge’s top citrus estates is on the verge of collapse after a soldier moved in to evict the owner yesterday at a time 30 000 trees are dying due to disruptions at the property.

ONE of Beitbridge’s top citrus estates is on the verge of collapse after a soldier moved in to evict the owner yesterday at a time 30 000 trees are dying due to disruptions at the property. BY STAFF REPORTER

Benfer Estate was established by prominent Beitbridge farmer Ian Ferguson who has been under siege for several years as powerful politicians in the district sought to push him out of the property.

Ferguson said Darlington Muleya, believed to be a soldier, arrived in a convoy of three vehicles claiming to have an offer letter that allowed him to take over the estate immediately.

“Muleya and his people went to my son’s house at the farm and said they were taking over the farm,” he said.

Ferguson said the police officer commanding Beitbridge district Chief Superintendent Patrick Majuta said Muleya had shown them an offer letter, but the farmer insisted that the document was irrelevant.

He said the farm invaders appeared to enjoy the protection of law enforcement agents and government officials in the district.

Ferguson said Zesa had disconnected electricity to the property because they could no longer pay bills as the invaders disrupted production.

He said the citrus plants were 28 years-old and the investment would go down the drain.

A close associate of Ferguson said the farmer did not deserve the victimisation he had suffered at the hands of the government in recent years considering his contribution to the country’s agriculture industry.

He said Ferguson had made an immense contribution to the development of the Beitbridge community.

“Ian is a gentleman, proud African and someone who has committed his life to the people and country he loves,” the source said.

“He built an enterprise employing many who would otherwise be destitute in one of the poorest corners of Zimbabwe as well as adding significant value to our exports.

“He is fluent in a Shotho dialect spoken in the south-western areas of Zimbabwe and the border with Botswana.”

Ferguson established the citrus estate on Lot 1 and 2 of River Ranch 48 years ago.

He is a former government irrigation specialist who helped establish most of Beitbridge’s irrigation schemes.

Ferguson believes he is being targeted for resisting the takeover of the Denlynian Game Sanctuary by people linked to powerful politicians in Beitbridge.

“He carved out of the almost worthless bush into a wonderland of productivity and enterprise by using his skill and determined dedication with a number of dedicated staff, and in a relatively short time.

He is an example of old-fashioned human endeavour,” his associate said.

“The treatment he has received is simply indescribable and so despicable one would be unlikely to believe it and yet he has stood firm.

“He has supported the very authority and its institutions that seek to orchestrate his destruction. He has been to jail for his belief in the rule of law and has become a victim of his own efforts to report criminal activity to the very authorities who in turn arrest him and his staff.”

In April Ferguson was given 24 hours to leave his farm by Muleya with the support of Lands ministry officials in Beitbridge.