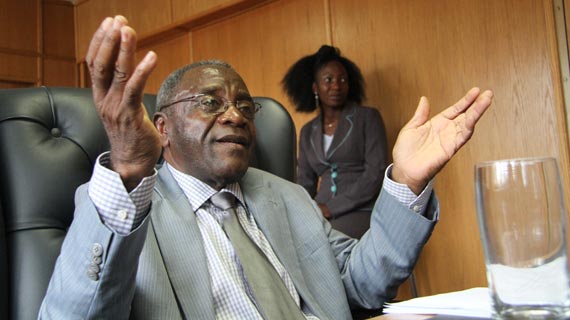 Fifa controversially declined to endorse Dube’s ouster by a group of 30 councillors who met in Harare for an extraordinary meeting on May 16.

Following concerted efforts by various local stakeholders keen to see Dube exiting Zifa, it is the highest football office on the world, Fifa, which has extended Dube’s stay in office.

To many local football followers, the move by the councillors to kick out Dube was about to herald a new era for Zimbabwe’s bleeding game of soccer. But Fifa suggested June 16 as the correct date for an extraordinary general meeting.

Between now and next month, Dube would probably be trying to save his head against the angry councillors.

For the past five years he has been at the helm of Zifa, Zimbabwean football has plunged deep into the drain with little hope of recovery.

Dube’s tenure has seen the Warriors being banned from taking part in the 2018 Fifa World Cup qualifiers due to a $67 000 bill owed to former Warriors coach Valinhos.

Understandably, Dube inherited an already sinking ship, but he has been outweighed by Zifa’s debt which has ballooned to $6 million while some of the association’s assets have been attached on numerous occasions.

Zifa board member responsible for finance Bernard Gwarada is on record complaining about being denied access to Zifa’s financial books.

In 2012, the national Under-17 and Under 20s were banned for three years each by CAF for failing to fulfill away fixtures against Congo Brazzaville and Angola respectively.

Dube has also been under fire for divorcing himself from local football — attending only one Warriors match since 2010 and his battered image has scared away prospective sponsors.

Since he assumed office, the Warriors have failed to qualify for three Afcon editions and a World Cup, while seven coaches have taken charge of the Warriors.

Empowered by Article 28 of the Zifa constitution, the councillors met and overthrew Dube whose administration they felt had brought down Zimbabwean football.

After forming a quorum, the councillors kicked out Dube as authorised by Article 22 Subsection(m) which empowers them to “revoke the mandate of one or a number of members of a body of Zifa.”

But Fifa declared “null and void” the councillors’ decision.

“According to article 28 of the constitution, the executive committee of Zifa has to convene an extraordinary congress within three months if one third of the members ask for it. Since the request was made on March 16 2015, the three-month lapse has not been completed yet, the deadline being June 16 2015.

In addition, the extraordinary congress should have been convened by the secretary general and chaired by the president which was not the case.

Therefore the conditions set in the Zifa constitution have not been met and the alleged extraordinary congress of May 17 2015 is thus considered null and void,” said Fifa.

There is an argument that Fifa is wrong in interpreting Zifa’s constitution as stating that a three-month period after the request of the meeting should lapse before the meeting is held.

The Zifa meeting however took place “within” the three months as provided by the Zifa constitution and 40 days after the agenda had been circulated.

Fifa said Zifa secretary general (chief executive officer) should have convened the meeting which should be chaired by the president but the councillors invoked Section 2 of Article 28 of their constitution which allows them to gather if the Zifa secretariat fails to arrange the requested meeting.

The world football governing body will this week hold their elective congress where incumbent Sepp Blatter is seeking a fifth term as Fifa president.

Blatter has an assurance of Dube’s vote and Fifa’s refusal to let the Zifa head go could be strategic in view of the elections.