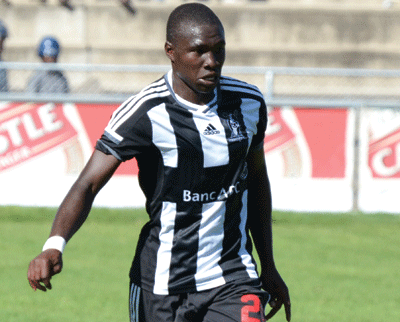 HIGHLANDERS head coach Bongani Mafu says he might be forced to convert some of his midfielders to strikers to offset the crisis of wasted chances against Tsholotsho and the injury of forwards Obadiah Tarumbwa and Thomas Chideu.

HIGHLANDERS head coach Bongani Mafu says he might be forced to convert some of his midfielders to strikers to offset the crisis of wasted chances against Tsholotsho and the injury of forwards Obadiah Tarumbwa and Thomas Chideu.

The Bulawayo giants will take on Hwange on Friday at Barbourfields Stadium (BF) in match day three of the Castle Lager Premier Soccer League before travelling to the Eastern Highlands for a date with Buffaloes three days later.

Bosso beat Tsholotsho 1-0 at BF for their first win of the season, but wasted a number of chances which could have seen them score an avalanche of goals against the league newcomers, who despite playing well, did not make any meaningful effort towards getting a goal.

After the match on Sunday, Mafu said many chances had been created and Tsholotsho could have been buried in the first half.

Tarumbwa was pulled out in the 40th minute after a knock on the thigh and replaced by Welcome Ndiweni while Chideu played the entire 90 minutes despite sustaining a heel injury.

Yesterday, the Bosso gaffer hinted he could be converting some of his midfielders to strikers, singling out Ndiweni.

“We need to convert some of our midfielders into strikers and come up with a game plan that supports them to get goals. I am thinking of Welcome Ndiweni. Oba (Tarumbwa) has a severe pain in the thigh and Thomas (Chideu) was kicked on the heel and we will have to see how they would be before we play Hwange on Friday,” Mafu said.

King Nadolo is still out after sustaining an injury last season while central defender Teenage Hadebe, was pulled out in the 70th minute with a knee injury.

Substitute Nqobizitha Masuku, who came in for Edmore Muzanenhamo in the 68th minute had a calf problem.

While addressing journalists after Sunday’s match at BF, Mafu said Bosso had a striker curse and the injury-inspired substitution dampened their attacking spirit.

Meanwhile, Hwange allowed ZPC Kariba to come from behind twice and settle for a 3-3 draw at the Colliery on Sunday while Chapungu lost 0-1 to champions Dynamos at Ascot Stadium on Saturday with FC Platinum losing by the same scoreline to Caps United at the National Sports Stadium on Sunday.

Chicken Inn were on the receiving end losing 0-2 to Harare City at Rufaro Stadium on Saturday with Whawha playing a 1-1 stalemate with fellow new comers Flame Lily in Harare.

From the southern region, only Highlanders and How Mine collected maximum points at the weekend with the gold miners beating Dongo Sawmills 2-1 at Vengere Stadium on Sunday.