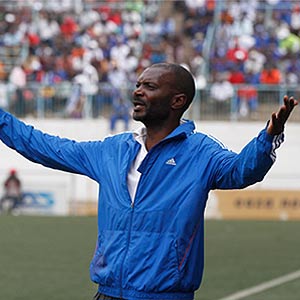 JUST 48 hours before the biggest game of the Castle Lager Premiership pitting log leaders Dynamos and second placed ZPC Kariba, both camps are fretting over injuries to key players.

The two sides clash at the National Sports Stadium on Saturday in a winner-take-all match. Dynamos lead the standings on 54 points and ZPC are second on 53.

However, both teams have injury worries with Dynamos set to miss striker Washington Pakamisa who picked up an injury at training yesterday.

“Pakamisa has picked up an injury at training. We are now waiting to hear from the doctors on the extent of his injury,” said coach Kalisto Pasuwa.

Midfielders Devon Chafa and Stephen Alimenda are also still battling injuries while Tichaona Mabvura deployed as a makeshift left back in the drawn game against Bantu Rovers, taking the place of Ocean Mushure who had been suspended, is also injured and might not play a part in Saturday’s encounter.

Midfielder Walter Mukanga is also unlikely to make it because of a knock.

ZPC Kariba too is certain to miss a number of key players including first choice goalkeeper Tendai Hove who is recovering from a hip injury sustained during their league match against Triangle after landing awkwardly.

According to ZPC Kariba assistant coach Godfrey Tamirepi, Meleka is battling a groin injury while Rediyoni could miss the match due to illness.

In the absence of Hove, ZPC Kariba coach Saul Chaminuka will have to rope in second choice keeper Tonderai Mateyaunga.

In the event that the players fail to recover on time, the two teams will go into the match severely depleted.

Dynamos team manager Richard Chihoro, perhaps aware of the mind games at play ahead of the crucial fixture declined to disclose much on the status of the injured players.

The champions are on top of the league table with 54 points with two games left before the end of the campaign, with closest challengers ZPC Kariba, in second place with 53 points.

ZPC Kariba had leapfrogged Dynamos to the summit of the table on Saturday after overcoming Harare City 3-2 before the champions earned a vital point against a spirited Bantu Rovers 24 hours later which lifted them back to the top of the log.

Those results left the Saturday match at the National Sports Stadium to determine the destiny of the championship.

Fate is however, in Dynamos’ hands as a victory over their opponents will land the championship with a game to spare. Even a draw will suffice for the champions as they will only need to win their last match against How Mine to clinch the championship for the fourth successive year.

ZPC Kariba though are aware a victory over Dynamos could also land them the championship as they would need to win their last match against Caps United by any margin to win their maiden championship.

Chaminuka’s men are also buoyed by the fact that they beat their more illustrious opponents 1-0 in the reverse fixture and Dynamos who are unbeaten in their last 17 matches still have sad memories of that defeat.

Caps United, who face Harare City on Saturday, still have a shout as they have a mathematical chance of being crowned champions.

The Green Machine, in third place with 49 points, will come into the picture in the event that the log leaders draw on Saturday and they win their next two matches against Harare City and ZPC Kariba with huge margins and Dynamos fall to How Mine.

That scenario will see Caps United lifting the coveted trophy on goal difference as they can finish the campaign with 55 points — the same as Dynamos.

Meanwhile, ZPC Kariba have maintained gate charges at $3 for the cheapest ticket for tomorrow’s match.

The rest of ground ticket remains at $3, with those wishing to watch from the VIP set to pay $5 while those in the VVP will fork out $10.

The match which has generated so much media hype will decide the destiny of the championship, unless a draw is played out.

Despite a bumper crowd expected to watch the block buster showdown between the two, ZPC Kariba who are the home team have decided against raising gate entry charges as they seek to accommodate as many people as possible.

“We are aware this is the biggest match of the season and the reason behind the decision is to try and accommodate everyone. We want as many people as possible to come and watch the match.

“By so doing we will still be able to get a reasonable amount of money from gate takings. If we were to raise the charges it would keep the fans away. We are expecting a bumper crowd as it is the biggest match of the season,” said Chisveto.