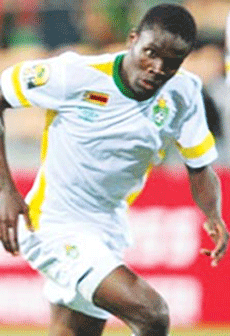 CHICKEN Inn will miss their captain Danny “Deco” Phiri who is out through suspension when they face relegation- threatened army side Black Rhinos in a Castle Lager Premier Soccer League match at Hartsfield Rugby Ground tomorrow.

CHICKEN Inn will miss their captain Danny “Deco” Phiri who is out through suspension when they face relegation- threatened army side Black Rhinos in a Castle Lager Premier Soccer League match at Hartsfield Rugby Ground tomorrow.

The GameCocks are seventh on the log table with 34 points from 24 games and come up against a team that is on position 13 with 27 points from the same number of games.

Chicken Inn coach Joey Antipas said they were ready for the match although missing the captain suspended after accumulating three yellow cards.

“Once again we have a difficult tie ahead. All the games that we play are difficult.

“We cannot afford to rest on our laurels and say that we will beat them.

“We have to fight the entire 90 minutes. It is a big blow that we are missing the captain.

“He has been playing very brilliant football of late.

“We will miss him, but we have the necessary cover,” he said.

Chicken Inn would be hoping to collect maximum points after they dropped two points following a one-all draw in the derby against How Mine in their last league match.

“It is a game that we also need to win to move away from the danger zone and I hope we will be up for it.

“We will give it our best shot and hope for a good result,” the former championship-winning coach with Motor Action, said.

Antipas said they needed positive results in the coming games as they could not capitalise in any other team slipping up as they are eyeing a strong finish in last league outings.

If they lose and Shabanie Mine win, Black Rhinos will go down the log table to third from the bottom.

Chicken Inn will be away to Highlanders in their next league outing while Black Rhinos will entertain Hwange in Kadoma.