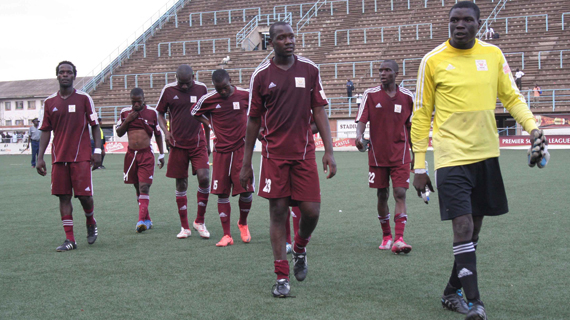 RELEGATION-threatened Shabanie Mine head coach Jairos Tapera is confident of rescuing his charges from the drop as they prepare to host Chapungu at Maglas Stadium this Sunday.

RELEGATION-threatened Shabanie Mine head coach Jairos Tapera is confident of rescuing his charges from the drop as they prepare to host Chapungu at Maglas Stadium this Sunday. MUKUDZEI CHINGWERE SPORTS CORRESPONDENT

The Chinda Boys are sitting on 14th position with 26 points from 24 games — one point adrift of a safety position — and have only six games left to ensure their safety. Mathematically, they need nine points to survive and with three home games to play, chances are high that the Central Region will maintain its quota of three teams in the Premier Soccer League in 2014.

Tapera is a temporary appointment at the asbestos miners with an objective of serving them from relegation.

He has, however, managed to collect a not-so-convincing three points out of a possible nine, winning his first assignment at home against Hwange before losing twice on the road with an identical 0-1 loss to Chiredzi and Dynamos.

“It is going to be a difficult end to the season. But we will fight to the last, it is an achievable task,” Tapera said.

“If you are doing something you have to be confident that you would achieve it, and we at Shabanie are very confident that we would survive relegation.”

Tapera’s charges next assignment would be a home date against provincial rivals Chapungu.

In their previous assignment at Ascot station they settled for a 1-1 draw, but on Sunday when they meet such a result would be unacceptable for Shabanie keeping in mind their safety aspirations.