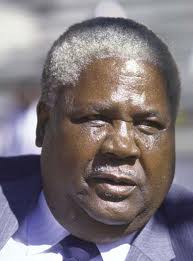 SPEAKER of Parliament Jacob Mudenda says he witnessed the torture and murder of some of the more than 20 000 people in Matabeleland and parts of the Midlands during the dark years of Gukurahundi in the early 1980s, but was powerless to stop it.

SPEAKER of Parliament Jacob Mudenda says he witnessed the torture and murder of some of the more than 20 000 people in Matabeleland and parts of the Midlands during the dark years of Gukurahundi in the early 1980s, but was powerless to stop it. MTHANDAZO NYONI OWN CORRESPONDENT

Responding to questions from delegates at a three-day men’s fellowship conference organised by the Brethren-in-Christ Church in Lobengula last Sunday under the theme “Peace and Justice” where he was the guest speaker, Mudenda said he had actually witnessed people being tortured by soldiers from the 5 Brigade in Tsholotsho.

Delegates had asked Mudenda, who was Matabeleland North provincial governor during Gukurahundi, to explain to them what exactly transpired during the atrocities.

Mudenda told the conference that at one point, the Tsholotsho district administrator called him to come and witness the beatings and killing of innocent people in the area.

“I went there with other politicians and found soldiers beating up people. I asked them why they were beating people and they told me that they were looking for dissidents,” he said.

“In another case, I witnessed nurses running away deserting health institutions.”

Mudenda said he asked senior politicians, among them the late Vice-President Joseph Msika, to help stop the massacre, but they refused.

“I then phoned Cephas Msipa (the then Zapu secretary-general) to organise a meeting with (the then) Prime Minister Robert Mugabe and he did that,” he said.

“We met Mugabe with other senior politicians for about 30 minutes and told him what was happening on the ground.

“We asked them (the late Vice-President Joshua Nkomo and Mugabe) to sit down as elders and reconcile. What I am telling you, I am doing it for the first time in my life.”

Mudenda said after the meeting with Mugabe, he met Nkomo, who asked him to expedite reconciliation between him and Mugabe, which he said he did with other senior politicians resulting in the signing of the December 22 1987 Unity Accord between Zanu PF and PF Zapu.

Mudenda said Gukurahundi was wrong and people were still hurting.

“The wounds are there and they need reparation. We confess as the government and this is the reason why Mugabe has said it was a moment of madness,” he said.

“We don’t want that to happen again.”

Mugabe has never apologised for Gukurahundi and the closest he has come to acknowledging its existence was by briefly describing it as “a moment of madness”.

According to a report by the Catholic Commission for Justice and Peace, at least 20 000 people, including children and pregnant women, were killed during the genocide that only ended after Nkomo and Mugabe signed the unity treaty in 1987.

Official reports on the massacres have never been made public and discussions on Gukurahundi have been widely suppressed.

Mudenda said when they were preparing to draft the new Constitution in 2009, they sat down as lawyers and agreed that to truly achieve peace as a nation, there was need for a truth and reconciliation commission, but political parties in the coalition government did not agree among themselves.

He said justice alone was not enough without the truth because for forgiveness to hold, the truth must be told first before justice and reconciliation.

“We must confess our wrong doings and if we haven’t admitted to them, it is impossible to achieve peace. “As the State, there are things that need to be confessed,” he added.

Mudenda said when the State is killing people, the church must stand up and challenge it, but that was not easy.

However, activists canvassed by Southern Eye yesterday said the issue of Gukurahundi needed a serious truth commission and not cheap politicking by politicians.

The Zimbabwe Catholic Bishops Conference secretary-general reverend Fradereck Chiromba said people affected by Gukurahundi should be given a platform to express their feelings about the massacres without fear.

“Sensitive issues like this one have to be given time for discussion and analysis and such sentiments must come from the affected people,” said Chiromba.

He said the nation should move forward, but for that to fully happen, there should be justice.

Zapu Matabeleland North provincial chairperson John Zolani Dlamini said people must be told the truth about what really transpired so that it does not happen again in future.

“We need to know who gave those orders for killing innocent people,” said Dlamini, who added that Gukurahundi must be included in the schools’ history syllabus.

Habakkuk Trust chief executive officer Dumisani Nkomo said people of Matabeleland and the Midlands were physically and mentally disturbed by the Gukurahundi massacres and the government should be serious about addressing the issue.

“The problem is that perpetrators are still in government structures and they are dragging their feet deliberately,” he said.