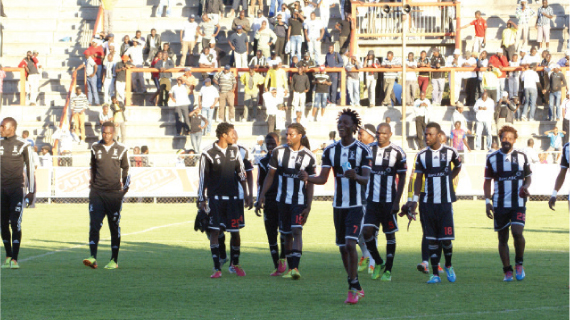 A FIERCE battle for the golden boot award has emerged as the 2014 Castle Lager Premier Soccer League (PSL) race enters the second half stage this weekend with Highlanders forward Charles Sibanda emerging the leading goal scorer which has put him in prime position to win the prestigious award.

The former FC Platinum forward netted a memorable hat- trick in a 4-2 rout of Bantu Rovers on Sunday to shoot to the top of the Castle Lager PSL goalscoring charts in the process-pushing How Mine’s Kuda Musharu into the shade.

Musharu had been the leading goalscorer with eight goals with Sibanda behind on seven goals. However, the football landscape turned on its head on Sunday when Sibanda scored his first hat trick since joining Bosso from rivals FC Platinum.

But the Bosso forward remains modest in his moment of joy. “I am really happy to score a hat trick.

But it was not me alone. I attribute it to the whole team’s effort. It gives me the confidence ahead of the upcoming games. I hope I will be able to take the chances that come my way and if I finish as the top scorer at the end of the season, I will be very happy,” said Sibanda yesterday.

The former Zimbabwe Footballer of the Year has been an integral member of Highlanders dressing room- scoring goals of supreme quality in decisive moments which have helped Highlanders to leap to the summit of the league table.

But Musharu remains a strong contender for the Golden Boot award with his eight goals for How Mine, who lost their third game in a row against Black Rhinos this weekend.

Caps United striker Dominic Chungwa is also in contention for the coveted award having netted six times for the Harare giants which has put him in third place.