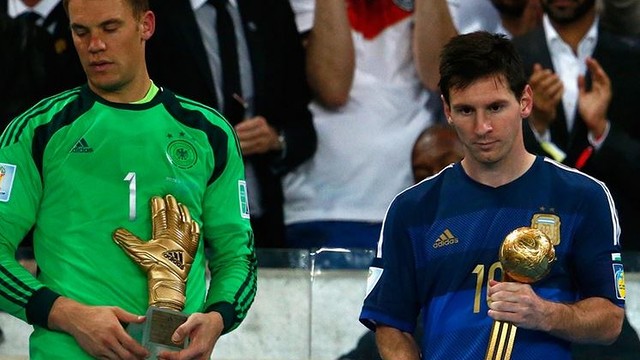 Argentina's Lionel Messi deserved to be named as the best player at the World Cup despite their 1-0 final defeat by Germany, said coach Alejandro Sabella.

Argentina’s Lionel Messi deserved to be named as the best player at the World Cup despite their 1-0 final defeat by Germany, said coach Alejandro Sabella.

Messi, 27, won the Golden Ball after scoring four goals in Brazil, but was subdued in Sunday’s final in Rio.

Former England captain Gary Lineker was disappointed by the Barcelona forward’s performances during the tournament.

Sabella said Messi’s award was “very deserved”, adding: “He played a great World Cup to get us where he did.”

Gary Lineker analysis “I had a feeling watching Messi for Barcelona this season that he was saving himself for the World Cup, but he has clearly not been in brilliant physical condition in Brazil.”

Messi said of the award: “The truth is it doesn’t interest me at this moment.

“We wanted to win the World Cup for all the people in Argentina and we couldn’t do it.

“We tried, but we didn’t have the luck we had in other games.”

All of Messi’s goals at the 2014 Fifa World Cup came during the group stage, with a double against Nigeria following goals against Bosnia-Hercegovina and Iran.

But the four-time world player of the year failed to score in the knockout stages, and he and Gonzalo Higuain were guilty of being wasteful in Sunday’s final.

“I’m not sure we saw the best of Messi,” said Match Of The Day presenter Lineker. “In the final he was largely suppressed.”

But Sabella said Messi was “a fundamental factor for where we ended up”.

The 59-year-old added he was proud of his players, and admitted they had paid the price for missing chances.

“Beyond the pain of the defeat in the final they can look themselves in the eyes and say they gave everything for Argentina,” Sabella said.

Chris Waddle analysis “I’m sure Argentina will get a good welcome back home, but they will be thinking they could have won this game. They had all the chances. After so many misses you start thinking if Germany get a chance, they will get the goal, and that’s what they have done.”

The former Leeds and Sheffield United player refused to discuss his future amid reports he was preparing to stand down.

He said: “I cannot speak about the future, the future for me now is to be with the players and my people – the coaches and my family – and to rest a bit.”

Midfielder Javier Mascherano said: “The pain is immense. We wanted to win this for the people of Argentina, for those who came here to support us, but we lost.

“We have represented our country the best we could.

“We have to lift our heads despite the pain. We gave everything we could out there.”