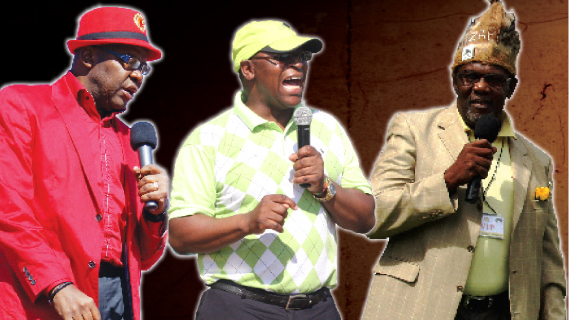 I AM standing in for Dumiso Dabengwa, the president of Zapu, to whom this invitation was sent. I hope I can do justice to the theme and the intention of the organisers who expected no less than the leader of my party.

I AM standing in for Dumiso Dabengwa, the president of Zapu, to whom this invitation was sent. I hope I can do justice to the theme and the intention of the organisers who expected no less than the leader of my party.

The invitation letter said: “The meeting will feature a panel of speakers drawn from Zanu PF, MDC, MDC-T and MDC-Renewal Team in explicating the causes and effects of discord in political parties on governance and democratic reform in Zimbabwe.”

The invitation then zooms into two specific questions that the panel is expected to address, namely:

What are the consequences of a fragmented opposition movement in light of the 2013 election outcome and the forthcoming 2018 plebiscite? Is Zapu willing and committed to be a part of the so-called grand coalition? My first comment is that the theme of the conference and the specific questions above do not tally because the theme suggesting a tendency or generalised state of discord in political parties, whereas the specific questions limit discussion to a perceived “fragmented opposition movement”. There are several concepts that need to be untangled before we can make adequate sense of the theme, as follows:a) Internal debate in political parties and between different tendencies within individual political parties should not be equated with “discord”; it’s more of a case of various tones that can be tuned into a harmonious tune.b) Zimbabwe has more than 30 registered political parties in 2014 and only one of them is the ruling party, ie Zanu PF. Formation of a new political party is not the same thing as entering what has been termed here an “opposition movement”, unless one takes the broadest meaning like what socialists used to call derisively “the unity of potatoes in a sack”.

The idea of “fragmentation” does not arise, therefore, because there should be no presumption of unity of purpose in the first place.

c) The first specific question communicated in the invitation implicitly suggests that the retention of power by Zanu PF through its win in the 2013 elections was a “consequence(s) of a fragmented opposition movement” and that this fragmentation can lead to the same scenario in 2018 elections.

d) The thesis or logic of the presumed “fragmented opposition movement” is behind the second question, asking Zapu and others if they are willing to be part of the so-called grand coalition. In the absence of what is “grand” about such a coalition, one has to again assume that this is meant to be a hold-all for any parties other than Zanu PF.   In the light of points made above about lack of clarity in concepts employed in the invitation, I shall try to deal with what I presume is the spirit of the debate and political positions being asked for as follows:a) Prior to the 2013 elections, Zapu was the only party to compile a public document on the need, purpose and modalities for the formation of a united front that could offer an alternative to the Zanu PF regime. This was released in December 2012.Historically, Zapu has championed the “united front” approach whenever this was necessary under various conditions of struggle, hence our alliances with Zanu in the 1972 Zapu-Zanu Joint Military Command, the 1975 Zimbabwe People’s Army and the 1977 Zapu-Zanu Patriotic Front.

b) The Zapu position on a “united front” in 2013 and beyond starts from the premise that meaningful unity must be focused on agreed goals and negotiated organisational structure. We managed a loose alliance with the MDC led by Welshman Ncube, but this was left too late for a complete agreement and there were no other takers.

The core conditions we put forward and which still hold were that, among other things:  Zapu advocates for a system of proportional representation in the government; We stand for real devolution of power (more than the grudging concession that was eventually agreed among the Global Political Agreement parties and worked into the new Constitution adopted in 2013). We are for unflinching commitment to human rights, doing away with the vestiges of the colonial state that concentrate power in an all-powerful state. Contracting parties shall retain their identities under a united front, ie Zapu has a legacy to protect that ensures continuation of unfinished business from the liberation struggle and founding values of the resistance to colonial rule that thrived on discrimination and denigration of some races and cultures. In answer, therefore, to the question of whether we are for a grand coalition, Zapu has an open door to those who share the same values and commitment to democratic culture. Current economic disarray and the incomplete democratisation agenda are reason enough for a united front, but what is also important is a culture of internal democracy as well as commitment to collective leadership.

The latter point is very important because what has been termed the “big man syndrome” is a recipe for perpetual dictatorship. “Big men” are created when individuals are branded as saviours of parties and faces of popular struggles, sowing the seeds of one-man dictatorships that are able to say: “Without me nothing is possible.”

Finally, in the current Zimbabwean context, there is a problem of one-dimensional agendas, such as “Mugabe must go!” Suppose such a wish is granted tomorrow, what happens to the institutional decay and wrong policy directions that Zanu PF has inflicted on Zimbabweans over the last 34 years?

Zapu thinks that this is a serious question, one whose answer will separate the sheep and the goats as far as a united front is concerned, “grand” or otherwise.

 Paper presented by Zapu alternate secretary-general Strike Mnkandla at a public meeting organised by Bulawayo Agenda in partnership with Habakkuk Trust & Radio on the “Discord in Zimbabwean Political Parties: The way forward”