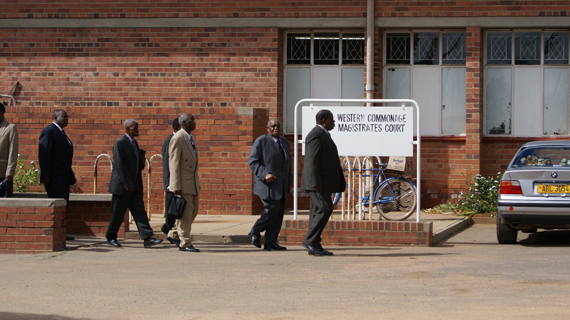 AS THE crisis in the AFM church in Lobengula, rages on, overseer reverend Tony Tshuma approached the High Court intending to bar 5 church members from seeking a peace order against him.

AS THE crisis in the Apostolic Faith Mission (AFM) of Africa church in Lobengula, Bulawayo, rages on, overseer reverend Tony Tshuma approached the High Court intending to bar five church members from seeking a peace order against him.

The application for a ban of litigation by Tshuma through his lawyer Walter Nyabadza comes after five church members sought a peace order against Tshuma and his lieutenants at the Western Commonage Magistrates’ Court.

The hearing for the protection order should have been held yesterday, but Nyabadza served the applicants with an application for stay of proceedings instead.

One of the applicants Claudius Manamela, confirmed receiving the High Court application but accused Nyabadza of ambushing them.

“He is just giving us the application for stay of proceeding today (Sartuday) when we are expected to go into court,” he said.

‘We will not be able to respond to his issues because we did not have time to read the papers.

“This is just a delaying tactic and it’s for the second time he is ambushing us.

“Last time the magistrate advised him that he should have served us with papers before we came to court rather than ambushing us.

“That was when he made demands on us in court when he could have served us with papers before we came to court.”

In his founding affidavit stamped at the Registrar of the High Court in Bulawayo on May 7 2014, Tshuma said he is aged 90 and was ordained president and overseer of the AFM on May 1 2008. He cited protection order applicants, Manamela and his group as respondents.

“The facts of the matter are that the president and overseer is charged with the management of the temporal, financial and business of associating bodies of believers in Zimbabwe, South Africa, Botswana, Mozambique and Zambia known as AFM of Africa,” Tshuma submitted.

He said the overseer administers all the functions of the church through pastors or ministers.

Tshuma said in terms of the church’s constitution, doctrine and practice, every member, including pastors, is bound to obey the lawful directions and instructions of the overseer.

“However, a debate which had started in the church sometime in January 2014 on the question whether the president had been properly ordained as such reached crisis point in March 2014 when he instituted legal proceedings undercover of case number HC580/14 seeking a declaratory order that he was the president and overseer of the church,” he said.

“The said proceedings have been opposed by three ministers of the church, namely reverend Joseph Matongo, Rev James Morris and Rev Clement Nyathi.

He said they have created their own centre of power with the Harare branch church as the headquarters.

“The respondents are part of a group who hold very strong views on the question of the president’s ordination,” Tshuma said.

“They have approached the debate on the assumption that he imposed himself as the leader of the church and that he should vacate that office. They have actively associated themselves with the secessionist agenda on Matongo, Morris and Nyathi who openly disassociated themselves from the church’s authority and declared their allegiance to Harare headquarters.”

He said that was why Manamela and his group sought to institute legal action against Tshuma.

Tshuma said the respondents through their actions had stripped themselves of any rights and privileges arising from the church’s constitution.

Tshuma said the group no longer had a right to interfere with church’s internal processes as per the constitution.