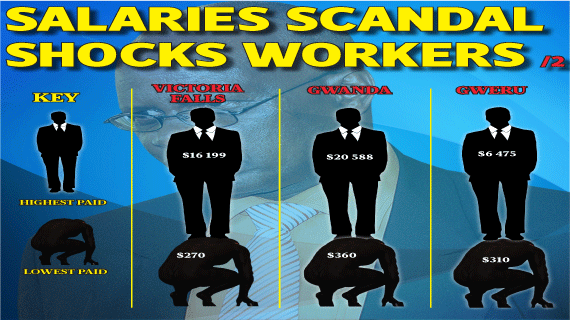 THE Victoria Falls Town Council’s lowest paid worker gets $270 per month and would have to work for about 60 months to reach the monthly remuneration of town clerk Phillip Ndlovu currently pegged at $16 199.

THE Victoria Falls Town Council’s lowest paid worker gets $270 per month and would have to work for about 60 months to reach the monthly remuneration of town clerk Phillip Ndlovu currently pegged at $16 199.

The government’s public announcement of the pay packages of town clerks and secretaries this week has shocked union leaders especially in municipalities that have gone for months without pay.

The majority of councils are also underpaying their workers with Bulawayo paying as little as $180 for the least paid it emerged yesterday.

An analysis of the pay packages for town clerks in Bulawayo, Victoria Falls, Gwanda, Gweru and Kwekwe released by Finance minister Patrick Chinamasa on Tuesday, shows that it would take these municipalities’ lowest paid workers more than two years to earn the salaries council executives rake in every month.

According to figures released by the general secretary of the Zimbabwe Urban Councils Workers’ Union, Moses Mahlangu, the lowest paid council worker in Victoria Falls earns $270, Gwanda ($360), Gweru ($310) and Bulawayo (180).

Mahlangu decried the obscene salaries paid to the local authorities’ town clerks saying the biggest culprits were Chitungwiza, Gwanda and Plumtree as they were on the bottom rank of the cities and towns categories.

“In category one there is Harare and Bulawayo. Category two has Mutare, Kwekwe, Gweru, Kadoma and Masvingo. Category three includes Bindura, Victoria Falls, Chitungwiza, Marondera, Chinhoyi, Chegutu, Redcliff and Gwanda while Plumtree and others fall into the lowest categories,” Mhlanga said.

“The reason behind categories is that Bulawayo and Harare are supposed to be the capable cities in terms of infrastructure, skills and revenue collection.

“Therefore, it follows that administrators in Harare and Bulawayo be the highest paid, but you find Plumtree, which is at the lowest of categories, paying $17 000 plus.

“When it comes to performances and other things, they are given concession as they are regarded to be in the lowest category but their salaries are competing with Harare and Bulawayo which are in category one.”

Mahlangu said it was sad that the lowest paid workers in local councils were poorly remunerated and getting wages below the poverty datum line while executives were excessively paid.

“The middle managers are getting an average of $700. Going by this analysis, the only cities where sanity seems to prevail are Bulawayo, Gweru and Masvingo,” he said.

However, Mahlangu urged Chinamasa to diligently look into the salary issue case by case when slashing salaries of town clerks so that he does not punish other local authorities living within their means.

“It will be interesting to note what criteria the Finance minister used to slash these salaries,” he said.

“The omnibus approach is not fair as there were other local authorities that have the capacity to pay and therefore should not be punished together with those that were stealing residents’ funds.

“The honourable minister is therefore advised to come up with a fair method of calculating the salaries, rather than making an impulsive decision.”

The obscene salaries were publicised after Cabinet demanded salary schedules of government departments, local authorities and parastatals following revelations that some executives were overpaying themselves while ordinary workers went for months without pay.