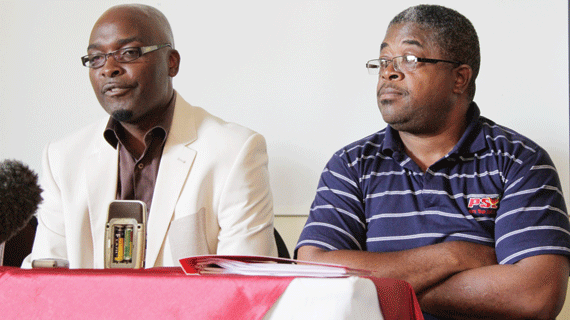 TWINE Phiri easily retained the Premier Soccer League (PSL) chairmanship with a resounding win over his only challenger Keni Mubaiwa in elections held in Harare yesterday.

Fifteen PSL board of governors voted instead of the 16 as new boys ZPC were not represented.

Highlanders chairman Peter Dube was confirmed as the PSL vice-chairman since his position was uncontested. Phiri said the win, which guarantees him another four-year term at the helm of the PSL, was a vote of confidence from his peers for a job well done in his previous term. Mubaiwa alleged that there was an outside force which was working against him.

“I promise I’m going to render my services well. In my last term I gave 100%, but this time it will be 150% . . . because I am an interested party in this,” said Phiri in his post-victory speech.

“They voted for me again because of the good job which I did. I feel that they voted for me because of the effort I put in this league. You look at how I managed to brand this league with sponsors like NetOne, BancAbc, Delta and SuperSport. When I came in 2010, the PSL had no sponsor and within the year I was the chairman I managed to bring in four sponsors and now I am bringing another one which makes them five. We need to increase sponsorship so that the clubs get more money. We also need to encourage clubs to source their own sponsorship,” he added.

Phiri revealed that the league, which had been put on hold to pave way for yesterday’s election, will kick off in two weeks’ time.

Delta Beverages, through their Castle Lager brand sponsored the league last season, but they have not confirmed their involvement this season. Phiri, however, said negotiations between the two parties were at an advanced stage.

He said he had found another sponsor who has promised to sponsor a 16-team tournament this season.

“We are still negotiating, but I know Delta are coming on board and I can also confirm that we will have another tournament this season involving all the 16 league teams. We are starting the league in two weeks’ time. All the clubs already have the fixtures,” Phiri said.

For Mubaiwa, the focus is back to Dynamos.

“This is going to be the time to go back and sort out problems at Dynamos,” he said.

“I don’t know how exactly I lost this election. Our treasurer was arrested on Monday and released on Tuesday and on that same day our players boycotted training, so I suspect there were outside forces which were working against me to lose this election.”

When it was put to him by journalists that he did not do much to campaign for the post, Mubaiwa said: “This election was for the 16 teams and the governors are the ones who were voting so I had my manifesto and I gave it to them. I did my campaign, trying to sell myself to all the other 15 teams.

“There was no need for me to go public with my manifesto and campaign because it was not a public thing. The media did not cover me. They did not talk good things about me, about my good things that I did at Dynamos. People concentrated more on the problems that affected my team this week instead of writing about the good things I did,” Mubaiwa said.