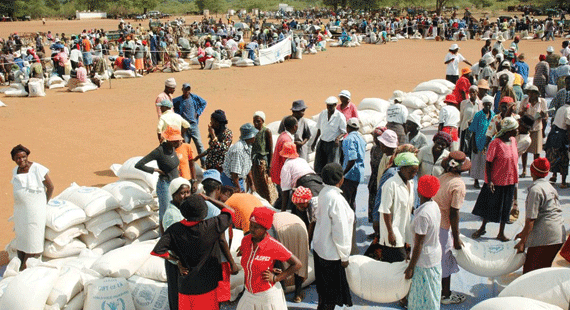 Is there a food crisis in Zimbabwe? The UN says 2,2 million people will be in need of food assistance until the end of March, based on a 2013 government-led joint survey by the Zimbabwe Vulnerability Assessment Committee (ZimVAC).

ZVISHAVANE — Is there a food crisis in Zimbabwe? The UN says 2,2 million people will be in need of food assistance until the end of March, based on a 2013 government-led joint survey by the Zimbabwe Vulnerability Assessment Committee (ZimVAC).

But the government is now questioning those findings.

The Zimbabwean media have reported extensively on the seeming tug-of-war. But an investigation found the situation more nuanced, with both widespread hunger and modest signs of improvement.

“Hunger is at a five-year high in Zimbabwe, with one quarter of the rural population . . . estimated to be facing food shortages between now and March,” says the World Food Programme (WFP).

“The 2013-2014 consumption year at peak was projected to have 25% of rural households food insecure . . . The proportion represents about 2 206 924 people at peak not being able to meet their annual food requirements,” said the ZimVac report, based on a survey conducted by both the government and WFP.

But Zimbabwe’s deputy agricultural minister, Paddington Zhanda said: “The numbers (of those in need) are exaggerated. There is no crisis. If there was a crisis, we would have appealed for help as we have done in the past. We are in for one of the best harvests we have had in years.”

A senior aid worker, who spoke under the condition of anonymity, said that while it was true the rains have been relatively good this year, the thriving maize plants in fields across the country offer a misleading picture.

“The fact is that years of poor rains and the general deterioration of the economy, prompting prices to rise, have left people with all their resources depleted. They are more vulnerable than ever before. With possibly good harvests this year, the situation will be a lot better next year, but not now.”

“One must realise that it is subject to change due to various factors to do with resource availability, as well as a better rainfall season, in a context of relatively improved availability of inputs,” he said. He expects the number of food insecure to come down considerably, as maize will be ready for harvest in some parts of the country in the next few months. In addition, the government programmes such as the Harmonised Social Cash Transfer will make the food situation better in districts that traditionally suffer from food deficits, he said.

“We expect the harvest to be a lot better than it has been in a long time.

“The government figures show that approximately 800 000 metric tonnnes were harvested last year. This year, the production output could be much higher reaching at least more than 1,2 million metric tons.”

WFP had planned to reach 1,8 million people during the current period, but funding shortages have meant that only 1,2 million are receiving assistance. Last year, the government stepped in with maize bought from neighbouring countries. This year, the government had reportedly placed an order for 150 000 metric tonnes of maize from South Africa, but aid workers say they have not seen that maize comin

Zhanda was dismissive of the reported order. “There is plenty of maize available in Zimbabwe,” he said.

“Food was not available in certain markets,” said another unnamed aid worker several weeks ago. “The situation has improved in terms of the availability, but people do not have money to buy food.”

WFP and its partners had been forced to scale back assistance and issue half-rations. In early February, the US government stepped in with an additional $4 million donation to help WFP continue food assistance in especially hard-hit areas. “It means the most needy are assured of support until they can cope on their own again, after the harvest in April,” WFP country director Sory Ouane said.

Dorothy Nxumalo is a government school fee collector working in Mazvihwa communal area, in Zvishavane district, where half of all households reportedly require food assistance. Nxumalo has a list of some 200 parents who owe months or years of school fees, amounting to as much as $400.

She knows it will be impossible to recover the fees from parents. “These people have not been able to afford to eat for years. How will they pay school fees?” she reasons. Public school tuition can cost as much as $25 for a three-month term.

Hove Euphas doubles as the headman and the principal of the Mototi Primary School, where most parents have been unable to pay fees.

“This is the best rain we have had in years, but not everyone has access to fertilisers and seeds, so everyone has not had a great crop. This generation of Zimbabweans in our village have never had the luxury to eat green maize cobs like we did in our childhood.”

His 88-year-old aunt, Ratidzo Chirumwana, has had a poor crop. She brews home-made liquor from the marula fruit. She sells some and distributes some for free. “I also have six goats left at the moment. When things get really bad, I will sell one and go and buy some maize meal.”

But Zhanda reckons that when people have livestock, the situation cannot be so bad.

“They can easily sell an animal and buy food,” he said. Yet the sale of livestock or assets is regarded by development and humanitarian experts as a sign of increasing vulnerability.

Still, Chirumwana is better off than many. Farmers like Mike Chivanga in the Tshongokwe area, in Matabeleland North Province, have lost all their animals in recent years. He says the last three years have been as bad as the severe drought in the 1980s. He did not have any fertilizer for his maize this year.

The government is running a cash transfer scheme in six vulnerable districts, including Matabeleland North, targeting 11 000 households, says agrarian expert Matondi, who will be assessing the programme for the government. Through the scheme, households receive between $10 and $25 per month, varying according to the number of family members.

Although the money is meant to be used to invest in assets such as livestock, Matondi’s baseline survey last year found that people were using the money to buy food, pay school fees and cover healthcare costs.

“They have been told not to use the money to do that,” he said.

The government is supposed to provide health insurance and tuition support for the most vulnerable people. Matondi reasons that those programmes probably need to be fine-tuned and better targeted.

Based on the evaluation, he says, the cash transfer programme is expected to be scaled up to 55 000 households. But the cast-strapped Zimbabwean government is struggling with a large deficit and needs support from development partners.