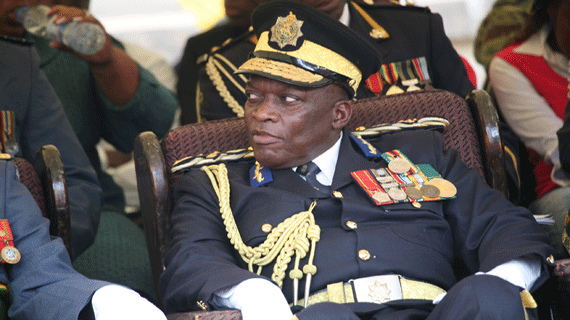 Augustine Chihuri was left with egg on his face after the Bulawayo High Court ordered him to comply with a directive to pay a former detective $64 000 in damages.

POLICE Commissioner General Augustine Chihuri was left with egg on his face on Friday after the Bulawayo High Court ordered him to comply with a directive to pay a former detective $64 000 in damages. Bazil Nyapokoto was hounded out of the force for testifying against fellow cops three years ago.

Justice Martin Makonese dismissed with costs an application by Chihuri to rescind an earlier decision by the same court to pay the damages after the police boss had filed an urgent chamber application seeking to shield one of his lieutenants, Superintendent Pilate Moyo who was facing contempt of court charges.

Moyo had defied an order by Justice Maphios Cheda in 2011 after he blocked the Deputy Sheriff from attaching his property to pay Nyapokoto the damages and an order for his incarceration was subsequently issued by the same judge.

Moyo had been sued by Nyapokoto for work-related victimisation.

However, on March 6 last year, Chihuri applied for a stay of execution of Justice Cheda’s order to incarcerate Moyo.

But Justice Makonese upheld Justice Cheda’s order forcing Chihuri to concede that the force would pay $64 000 in damages to the detective. Police agreed to pay the amount within two months, but when the period was about to lapse, Chihuri made a U -turn and instead filed an application for rescission of the judgment.

The application for rescission was done late and was accompanied by another application for condonation of late filing which Justice Makonese dismissed on Friday with costs.

Justice Makonese ordered the police to pay Nyapokoto, putting closure to a case which was pending before the court for the past three years.

“The matter is over. The police have been ordered to pay the damages putting to rest the matter,” he said.

“The judge asked them what they were doing in court yet they had agreed to pay the damages and he ordered them to pay the amount.” If the police fail to pay, Moyo would be at risk of being incarcerated.

Justice Cheda had ordered Moyo’s arrest and incarceration for blocking the deputy sheriff from attaching his property.

Nyapokoto kicked out from his official residence at Ross Camp after he testified against his workmates in an inquest into the death of two armed robbery suspects.

Chihuri got involved when he filed an urgent chamber application seeking a stay of execution of the order.

He argued that Nyapokoto and his lawyer; Muganyi should not have sued Moyo in his official capacity.

Chihuri’s deputy, Innocent Matibiri, had also said in his founding affidavit that they were seeking rescission of the order, although they were barred to tender their plea, as they had approached the court late due to administrative issues.

There was drama on March 6 last year outside Bulawayo High Court after Moyo was briefly arrested by the deputy sheriff when his case was being argued in the judge’s chambers.

Moyo heaved a sigh of relief 20 minutes later after Muganyi intervened and ordered his release as he was being whisked to prison.