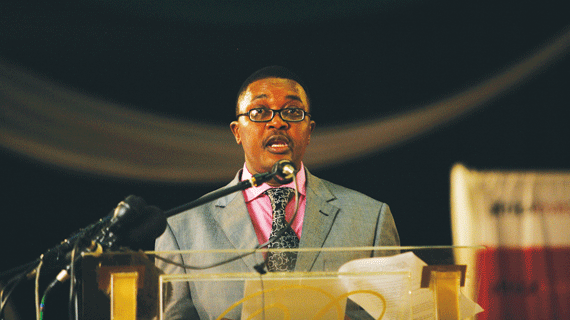 TOURISM and Hospitality Industry minister Walter Mzembi has set himself on a collision course with his Zanu PF colleagues and war veterans by declaring that talk of a Victoria Falls name change was “much ado about nothing”.

TOURISM and Hospitality Industry minister Walter Mzembi has set himself on a collision course with his Zanu PF colleagues and war veterans by declaring that talk of a Victoria Falls name change was “much ado about nothing”.

Mzembi, who was involved in marketing and lobbying for Victoria Falls to successfully host the United Nations World Tourism Organisation (UNWTO) general assembly in August, instead said efforts should be made to declare the resort town a special zone and interrogate why it was generating little revenue for the country.

Mzembi posted on his Twitter account saying the tourist resort was currently bringing nothing to Zimbabwe and Zambia compared to what the Niagara Falls and Iguazu Falls did for Canada and Brazil respectively.

Zanu PF resolved at its just-ended annual national conference in Chinhoyi at the weekend that Victoria Falls and several other institutions be renamed after the country’s liberation war heroes.

The Zanu PF committee on sports, culture, religion and liberation heritage chairperson Ignatius Chombo said it did not make any sense for colonial names to remain in place in an independent Zimbabwe.

The proposal to rename Victoria Falls has attracted mixed reactions from tourism players with some raising fears that a name change could make the resort town unpopular and affect tourism.

Mzembi said if it was important to change Victoria Falls’ name, then the process should start by “scrapping our names which are unAfrican”.

“It’s already double barrel: Mosi Oa Tunya, like many of us Africans with both. If it was so important, we would first scrap our English, French, Latin, German and in some instances Boer names to African. In any event this is a shared heritage between us and the Zambians and if they chose to stick to Vic Falls, is Mosi Oa Tunya Zimbabwean?”

He said focus should be on how Victoria Falls could be a cash cow for the country by declaring it a special zone instead of talking of name change.

“And finally there is a Cabinet committee on name changes and honours. When it gets to that, it will exhaust the merits and demerits. Focus on Victoria Falls benchmarking against Niagara and Igauzu falls. Interrogate why it makes so little for us. Focus on Niagara $30 billion for Canada and the United States. Mosi Oa Tunya $? for Zimbabwe and Zambia. South Africa makes more out of it, shame (sic),” said Mzembi. Mzembi even added a Bible verse to buttress his views.

“Isaiah 60:11 — Keep thy gates open. Do not shut them day and night, so you may enjoy the wealth of the Gentiles . . . God gives wealth in generations. We held UNWTO general assembly there (Victoria Falls) to raise awareness to this. Declare Victoria Falls a special zone now,” Mzembi said.

He said there was need to focus on growing domestic tourism.

“Zimbabwe’s middle class is in orbit in the Diaspora. We need to tap into this market which is an extension of domestic tourism. Whenever the Diaspora visits, they take at least two local family members to resorts. We need to incentivise them to do more. Low cost/budget holiday back at home campaigns through a rebranded Air Zimbabwe is one option. London, US, SA, Australia etc,” said Mzembi.