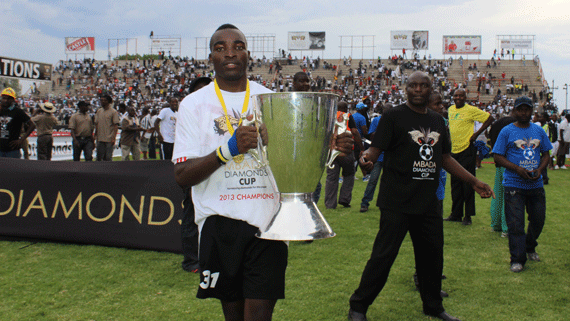 HIGHLANDERS goalkeeper Munyaradzi Diya, who left the country at the weekend for trials with Absa PSL side Lamontville Golden Arrows, has also attracted the attention of Ajax Cape Town.

HIGHLANDERS goalkeeper Munyaradzi Diya, who left the country at the weekend for trials with Absa South African Premier Soccer League side Lamontville Golden Arrows, has also attracted the attention of Ajax Cape Town.

The Highlanders goalminder was called up for the Warriors international friendly against Mozambique, but could not feature in the match as he had to attend the trials.

“Diya left for South Africa for an assessment at Golden Arrows. He started (trials) on Sunday, but we wanted to take advantage of the Telkom Knockout Cup and the suspension of the league. Golden Arrows are also interested in Hwange defender Chipeta,” he said.

He said the two players were invited to South Africa because they had worked very hard.

“Erick has been very consistent for Hwange and it is no surprise that he has been called up. Even when his team struggled he popped up with crucial goals and was the mastermind of the Hwange defence.

“Diya has also been very consistent. Ever since he took the number one jersey from Ariel Sibanda who happened to be the top goalkeeper in 2012, Diya never looked back,” he said.

“Football is a very short career so if a team has shown interest in players, the players should grab the opportunity with both hands. It is also a short career because you notice that now only one player from the 11 that made it into last year’s calendar are in this year’s calendar,” he said.

Chipeta had a good season for Hwange and was called up to the national team by former Warriors coach Klaus-Dieter Pagels while Diya has also featured for the Warriors.

Both players were selected as soccer stars of the year finalists in Harare on November 23.

They are expected to be part of the players who will be honoured at a banquet in Harare on Friday for their outstanding performance this season.

Chipeta is managed by Calvin Nyazema.

Deda said he did not have the exact date of when the two players would be back home.

Should the pair eventually join SA sides, it will be a big blow for Warriors coach Ian Gorowa as he attempts to finalise his 23-member squad for the 2014 African Nations Championships finals.

The tournament is for locally-based players only and Gorowa has already lost influential midfielder Devon Chafa to a Fifa ban and top scorer Tendai Ndoro who has joined Mpumalanga Black Aces.

Yesterday, Gorowa was held up in meetings with the Zifa leadership to map the way forward after the Mozambique friendly and the cancellation of another match against Libya, which had been set for this weekend.

Gorowa wanted a camp in Johannesburg before the January 7 international friendly against Gabon, but Zifa’s financial problems and Government’s lack of interest in the national team may curtail those plans.