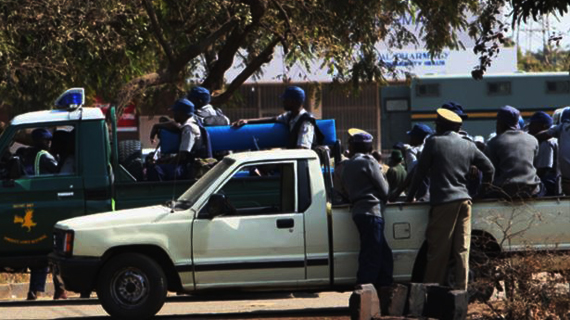 POLICE prosecutors might be barred from prosecuting cases in the country’s courts if the Constitutional Court (Concourt) upholds the application of three suspects facing theft charges challenging their independence and impartiality in prosecuting. Richard Muponde Senior Court REPORTER

Jackias Mhlanga, Sinikiwe Dube and Nkosilathi Young Siwela were charged with stealing cement in Inyathi, but they have challenged the independence and impartiality of police prosecutors in line with the independence of the National Prosecution Authority (NPA) as enshrined in Section 258 of the Constitution arguing that cops report to another authority other than the Prosecutor General (PG).

The constitutional challenge comes after the three questioned the independence of trial prosecutor Assistant Inspector Themba Lemekani whom they said did not question why his boss, the officer-in-charge of Inyathi Police Station, was turning them into accused persons yet they were the ones who reported the theft of cement belonging to Bubi Rural District Council in February last year.

In their application prepared for referral to the Concourt by their lawyer Kucaca Phulu before Inyathi magistate Ndumo Masuku, the trio questioned how police prosecutors could be independent and impartial when they were subject to discipline and control by their supervisors in terms of the Constitution and Police Act.

“It is submitted that the prosecutor Assistant Inspector Lemekani, being a police officer, is acting prosecutor in contraventions of Sections 258, 259 and 260 of the Constitution relating to the functions and independence of the PG. This infringes the right of the accused person to a fair trial,” Phulu said.

“Section 258 establishes an NPA which is responsible for instituting and undertaking criminal proceedings on behalf of the State and discharging any functions that are necessary or incidental to some prosecutions.”

He said Section 259 put in place provisions to ensure the independence of the PG, who is head of the NPA.

“Inter alia Section 259 (10) requires any person assisting the PG, among other qualifications, to be independent in exerting their functions, impartial and subject only to the law and to the direction and control of the PG.

“In this case, the prosecutor Assistant Inspector Lemekani being a police officer is subject to the discipline and control of his supervisors in terms of the Constitution and Police Act (and) cannot be said to be independent, impartial and subject only to the law and the direction or control of the PG.”

Phulu said the trio made an important point to establish the status of police prosecutors in view of the emphasis on the independence of the NPA and the PG by the Constitution.

“It is submitted that the raison d’être of the framers of the Constitution was to provide for independence, particularly to separate functions of the executive branch and NPA. It’s submitted that the application is not frivolous or vexatious. In the premises the accused pray that the matter be referred to the Concourt,” Phulu said.

If the application succeeds, it could put a dent on the prosecution of cases at the courts where the NPA heavily relies on police prosecutors.

The State is still to respond and a ruling will be made on November 15 whether to refer the matter to the Concourt.