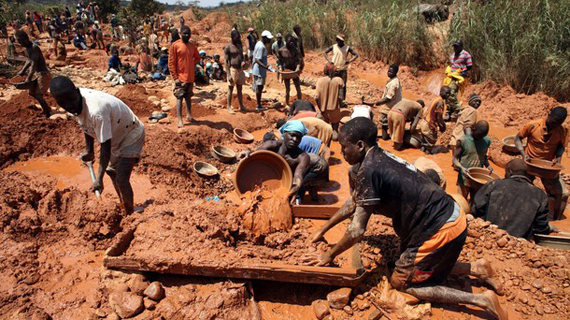 HARARE — The face of Lydia Madhoro (25) is dusted red from soil as she and her three female colleagues take a brief lunch break. They have been working since dawn on their gold mine in Zimbabwe’s Mashonaland Central province.

HARARE — The face of Lydia Madhoro (25) is dusted red from soil as she and her three female colleagues take a brief lunch break. They have been working since dawn on their gold mine in Zimbabwe’s Mashonaland Central province.

Their hand-dug shaft has reached about 10m in depth, and their conversation revolves around estimates of how much they will make from a pile of gold-bearing excavated rocks.

The ore still has to be taken to a miller about 15km away to be crushed, after which it will be mixed with water and mercury to separate out the gold.

Truck operators who transport the ore charge them $50 a tonne, and casual labour used for the loading demand $10 for the same quantity. The millers charge a fifth of the gold obtained.

“We are at work almost every day of the week, going underground for the ore. This is extremely hard work that has been associated with men for a long time, but we are now used to it. We have to do it because, as single mothers, we must feed our families,” Madhoro said.

The four women formed a syndicate in 2011 to acquire their 0,8-hectare claim near Mazowe, about 50km north-east of the capital, Harare. Madhoro and her partners are certified gold miners and sellers from the mining town of Bindura, about 40km away. They paid about $1 200 for the registration, prospecting licences from local administrators and surveyor’s fees.

In a good month, they make as much as $2 500 from the mineral, which they sell to the government-owned Fidelity Printers at $50 a gramme. The money is divided among the partners in equal shares after paying the millers’ fees and transport costs; the proceeds have so far been used to build basic housing.

“Even though we are not yet making that much money, the good thing is that we have stood up as women to fend for ourselves. We are actually doing better than some men, and I am proud of the fact that I singlehandedly feed my twin daughters and can afford money for their primary education, clothes and other basic needs,” Madhoro said.

“Women are breaking the barriers by venturing into mining, an industry that is dominated by men.”

Eveline Musharu, president of the 50 000-strong NGO Women in Mining, which helps women start mining ventures, said: “Women are breaking the barriers by venturing into mining, an industry that is dominated by men.

There are tangible gains for women who have joined the sector as small-scale miners, especially in gold and chrome, as they can afford household nutritional needs, pay school and medical fees, and even afford some modest luxuries.”

The national NGO was established in 2003, and its members are mainly drawn from the ranks of the rural poor, the disabled, widows, single mothers and those living with HIV and Aids. Musharu said women are turning to mining as an economic lifeline because, given the vagaries of the climate, subsistence farming is no longer a guarantee of putting food on the table.

The six-year-old Zimbabwe Women Rural Development Trust (ZWRDT), which has more than 500 members and operates mainly in the Midlands and Matabeleland provinces, also helps women get a foothold in the mining sector. More than 100 members of the organization are miners.

ZWRDT director Sarudzai Washaya said 35 of the members, all of whom had previously worked as illegal miners, had been coached to enter the sector legally, and have seen their incomes grow as a result. According to Washaya, mining legally has several advantages, including eliminating the risk of being arrested and having one’s minerals confiscated. Legal miners are also guaranteed of a formal market where they are safe from thieves.

“There is a lot of keenness on the part of rural women to get into mining as they realize the opportunities that the sector offers. Chiefs and district administrators help our members identify and obtain mining claims, and ZWRDT facilitates the acquisition of prospecting licences, and prospective miners pay a joining fee of $20,” Washaya said.

“We have realised that it is important to build confidence in women, [showing them] that they can perform just as well as, if not better than, the men who dominate the mining sector. In some cases, the women are now employing men, and a few have even managed to buy luxury cars,” she said.

“If well supported, women can use their involvement in mining to fight the many livelihood vulnerabilities they face” Virginia Muwanigwa of the Women’s Coalition in Zimbabwe, a national NGO for the advancement of women, said.

“Because our society is dominated by men, it is difficult for women to produce collateral when approaching banks. They don’t have title deeds to land, especially in rural areas.”

She said, “If well supported, women can use their involvement in mining to fight the many livelihood vulnerabilities they face. Women miners can benefit a lot from a revolving fund that the government and donors can help establish and from which they can borrow, as banks are unwilling to lend them money.”