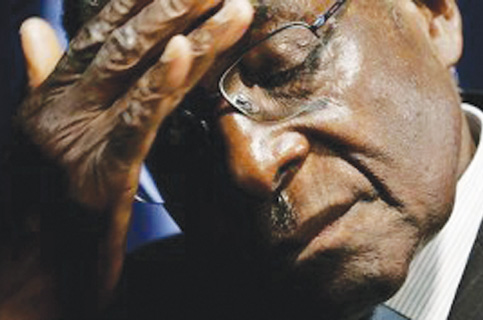 The Constitutional Court (Concourt) yesterday unanimously declared some parts of Section 33 of the Criminal Code (insulting the president) unconstitutional.

The Constitutional Court (Concourt) yesterday unanimously declared some parts of Section 33 of the Criminal Code (insulting the president) unconstitutional.

The court made the decision in a ruling declaring the prosecution of Bulawayo visual artist Owen Maseko, who was barred from running an exhibition on Gukurahundi, a violation of the Constitution.

Maseko was arrested in March 2010 for exhibiting paintings at the National Art Gallery in Bulawayo depicting the 1980s Matabeleland and the Midlands Gukurahundi massacres perpetrated by 5 Brigade soldiers.

He was charged with undermining the authority of or insulting President Robert Mugabe through his art works.

He was being tried at the Bulawayo Magistrates’ Court in September 2010 when his lawyers from the Zimbabwe Lawyers for Human Rights (ZLHR) filed an application seeking for referral of the case to the Concourt, contesting the criminalisation of creative arts, which is believed to be an infringement of the freedom of expression.

In his ruling on the matter, Deputy Chief Justice Luke Malaba said there was no clarity that the sections of the Criminal Law (Codification and Reform) Act Chapter 9:23 were not contravening sections of the former Constitution and called Justice minister Emmerson Mnangagwa to appear before the Concourt on November 20 if he so wishes to clarify the issues.

They argued that sections of the charges against Maseko infringed on the freedoms of expression and conscience.

In a similar case, the Concourt struck off the roll the case of Tendai Danga after the National Prosecuting Authority (NPA) withdrew the charges against the Bulawayo resident.

He was also facing charges of undermining the authority of, or insulting Mugabe just like Maseko.

The State conceded that the facts in the original matter did not disclose the offence of insulting the president.

Prosecutors claimed Danga had questioned the integrity of the Zanu PF leader as president of Zimbabwe.

Justice Malaba issued a stern warning to the NPA to review similar cases and to ensure that only deserving cases were brought to the Concourt. Justice Malaba chided the State against prosecuting matters in which statements were uttered in beer halls and other social places, as such frivolous matters only served to denigrate the Office of the President.

According to ZLHR, there are about 80 similar cases pending before the courts.