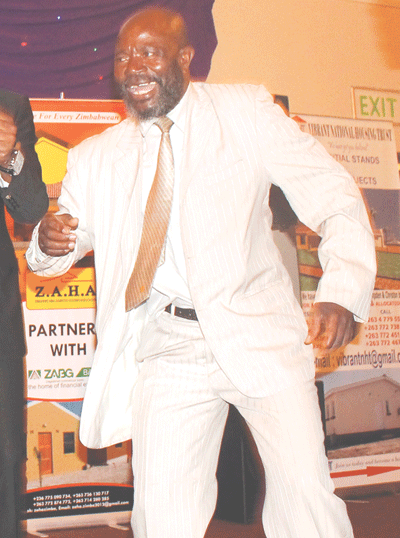 HE came in unannounced in the company of more than five men and the auditorium went wild as he waved and made his way to a seat in the back row.

HE came in unannounced in the company of more than five men and the auditorium went wild as he waved and made his way to a seat in the back row.

A deafening applause punctuated with jovial cheers, whistling and ululation brought the programme of the night to a halt.

Whether by coincidence or design, the frenzied entry came in the middle of the guest of honour’s speech and attention shifted from the podium.

The guest of honour had to stop halfway through a statement to give way to the hilarious spectacle.

The man stirring the hullabaloo was Buhera South Member of Parliament Joseph Chinotimba, the guest of honour on the podium was Tourism and Hospitality minister Walter Mzembi and the event was Mathias Mhere’s album launch at Jameson Hotel on Monday night.

Mzembi had to invite Chinotimba, who was not on the guest list, to sit with other dignitaries on the front row.

Since Chinotimba joined the proceedings, the programme got intermittent comic moments making it one of a few fun-filled album launches.

To match the hilarious mood the auditorium had just assumed, Mzembi comically referred to Chinotimba as a “spiritual brother who has been led by the Holy Spirit to this spiritual event” apparently hinting that he had come uninvited.

More comedy was to follow when Mzembi, Chinotimba and Kuwadzana MP Nelson Chamisa were asked to autograph a CD for auction.

Chamisa, who signed after Chinotimba, sent the whole auditorium cackling when he said there was no more signing space on the CD sleeve because the hilarious legislator had scribbled all over.

Chinotimba was at it again during the CD auctioning when he declared he would take the CD for $400, but the money would come from Mzembi’s office.

Chinotimba quoted a Bible verse to encourage people to support their own — in that case Mhere. A few other people got the album for figures ranging between $100 and $200.

When dancing time came, the legislators and other prominent people like businessman Chamu Chiwanza exhibited some exciting skills as they got down to Mhere’s new tracks off the eight-track release titled Nguva Yenyasha.

Besides the fun and excitement, the album launch was seriously eventful.

Chamisa, who extensively quoted the Bible, urged Mhere to be humble adding that it was by the grace of God for the musician to gather prominent people for the launch.

Mzembi said Mhere, who comes from Masvingo, was a good religious ambassador for the province.

He encouraged the young musician to take advantage of the growth of religion to promote his career.

“Religion is promoting travel. If we don’t go to church on Saturday and Sunday, transport business will come to halt. Let’s be associated with the growth of churches which is already a marketplace for tourism. Churches are attracting people more than night clubs and we all have to take advantage of this growth,” Mzembi said.

Mhere’s album, which looks at different issues of Christianity and how people can enhance their relationship with God, is made up of songs like Ziya Rangu, Idya Tafura, Zino Irema, Number Busy, among others.