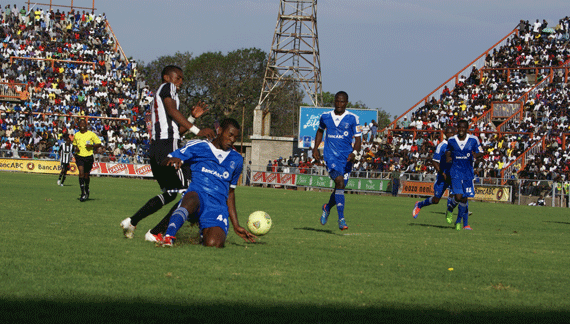 DYNAMOS shot back to the top of the Castle Lager Premier Soccer League (PSL) following their 1-0 victory over Highlanders at Barbourfields Stadium in Bulawayo yesterday.

Ocean Mushure converted a penalty-kick in the 86th minute for DeMbare to beat their bitter rivals in their own backyard.

Both teams had to finish the game a man down following the expulsion of Highlanders striker Njabulo “Tshiki” Ncube and Dynamos defender Partson Jaure in the 30th minute by referee Thabani Bhamala.

Dynamos are now top with 48 points from 26 games while Highlanders trail by a point from the same number of games in third place.

DeMbare coach Kalisto Pasuwa was happy with the result although he bemoaned the officiating.

“The game was disturbed by officiating. Most of his decisions were against us during normal play. We had to bypass the midfield to get into their half and get the ball,” he said.

“The referee was working against us in every decision. The red card was one of the decisions by the referee because it was retaliation from the player and he gave Partson Jaure the red card.

“We had to make a decision to cover our central defence. We will have to take each game as it comes when it comes to the championship,” he said.

“The game was OK. We played well. We missed a lot of chances. They never created. They did not have a corner and we had lots of corners,” he said.

“They got a penalty. I guess sometimes we have to learn the hard way.

“We did everything right except to score. Everyone was committed except the fact that we were missing chances.

“To me the penalty was not clear. At the end of the day it is the referee’s decision.

“The loss does not affect the championship campaign. It’s our job to go all out and get good results.

“The referees tried their best. It was a big game. Some call it the battle of Zimbabwe. But they did their best. By the grace of God one day we will beat Dynamos.”

Highlanders dominated the game in the early stages with Mushure clearing Bhekimpilo Ncube’s cross in the seventh minute.

A minute later Bhekimpilo got another chance, but he headed a Bruce Kangwa cross over the bar.

Njabulo and Jaure both had a good showing, but were caught on the wrong side when the Dynamos centre-back stomped on the Bosso forward, who in turn retaliated.

The match had to be stopped while the referee and his assistants cooled tempers down after Jaure had charged menacingly at the man at the centre, only to be restrained by teammates and the police.

The match restarted three minutes after the commotion.

Dynamos captain Murape Murape was also caught in the mêlée and Pasuwa pulled him out in the 34th minute for Victor Kamhuka.

George Chigova — Dynamos goalkeeper — played a central role in time-wasting having to be attended to six times without caution.

This riled supporters who threw missiles onto the pitch, but were calmed down by Highlanders players at some point.

Bosso captain Innocent Mapuranga did not finish the match after picking an injury in the 60th minute during a goalmouth scramble which saw Dynamos Boban Zirintusa’s header hitting the crossbar.

DeMbare were awarded a penalty in the 86th minute when Bosso midfielder Mthulisi Maphosa hacked down Mushure.