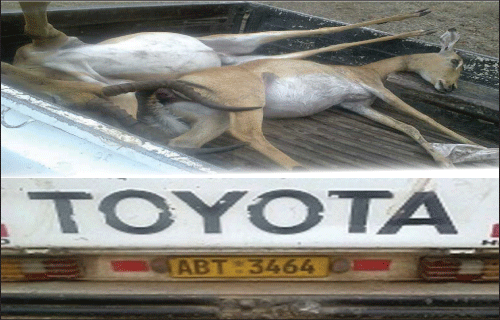 The alleged invaders also reportedly harassed four Polish hunters who had come for trophies at the conservancy.

Managing director Ina Ferguson of Denlynain (Pvt) Ltd and Trans-Limpopo Carriers running the conservancy known as Denlynian and Tamari Wildlife conservation area, described in title deeds as sub-division lot 7A and remainder Lot 8 Jojempi Block, said they reported the matter to the police, but did not get any relief.

He identified some of the invaders as Julius Siziba, Joel Muleya and Rambalani Choen.

“They came last week with the assistant district administrator Peter Moyo claiming they had offer letters to occupy the conservancy,” Ferguson said.

“The claimed they had secured an order setting aside that of the High Court in 2010 for them to vacate the conservancy after a similar invasion,” Ferguson said.

“Moyo had given them offer letters for A1 settlement in the conservancy which even if true, would be outrageous.

Ferguson said the staff at the conservancy slept in the bush after being assaulted by the invaders.

“A woman and her children aged five and two were assaulted. My daughter had to take them to hospital,” he said. “Some game scouts were assaulted and failed to walk.

“They smashed the door of our cold room and took three tonnes of meat from the hunts. “They also took elephant skin, other hides and broke into the hunting lodge and took mattresses. My daughter spotted a vehicle they were using with two impala and photographed them.”

Ferguson said the police only accepted their report after the intervention of lawyers.

“I phoned the police and they sent details from the Law and Order Section. They came and demanded passports from the hunters and certificates to conduct the hunt instead of looking at the issue that we had reported,” he said.

“The police only accepted our report and gave us an RRB number after the intervention of our lawyer.”

Ferguson said he went to the High Court and got a fresh eviction order against the invaders that they would hand over to the police tomorrow.

“I do not talk over the phone I am sorry, why don’t you call him (Moyo) and get his comment,” he said.

“I was away and returned today,” he said. “I overheard there was a report made along those lines. What I know is that a case was opened that is under investigation.”

In 2010, the High Court evicted the same group from the conservation area.

The two companies that had been charged for occupying the land illegally were also acquitted in the courts.