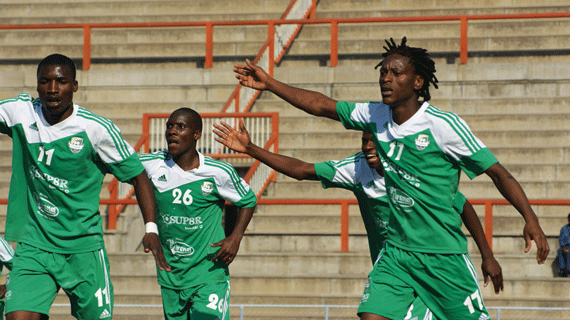 A ZVISHAVANE derby is on the cards as FC Platinum and Shabanie Mine clash in a Castle Lager Premier Soccer League (PSL) match at Mandava Stadium on Saturday.

The match will be beamed live on SuperSport 9.

Shabanie Mine emerged 5-3 winners on penalties when the two clashed in the final of the BancABC Sup8r Cup at the same venue last month.

Earlier FC Platinum had lost 0-1 to the former asbestos miners in the first league match.

It was a sweet victory for Shabanie Mine as it was their first major trophy in 12 years. They had last won in 2001 when they beat Harare giants Dynamos 1-0 to lift the BP Cup.

However, Saturday’s tie will be a different ball game as the teams clash in a league tie.

Both teams will want to pick up maximum points as Shabanie Mine dropped two points at home after playing a 1-1 draw with Monomotapa while FC Platinum lost 1-2 away to Triangle last Sunday.

FC Platinum coach Lloyd Mutasa said they could not afford to lose against their neighbours.

“We are preparing for the match with the hope that we will come out on top. We need the win so much more than Shabanie Mine. They beat us in the league and we lost in the BancABC Sup8r Cup final, so we cannot make it three out of three.

“As an institution, we just need to pick ourselves up and get maximum points in the coming games because we do not know where they will take us,” he said. Shabanie Mine coach Luke Masomere said they were geared up for the Zvishavane derby.

“Our preparations for the match against FC Platinum are better this time. There is a marked improvement because we have two of our players back. Pervington Zimunya, red carded when we played Caps United, is back. Caleb Masocha had been injured, but he is doing light training as he is still not fully fit,” he said.

“Erea Phiri, Pardon Marima and Peter Muzondo are injured. “We also have Phillip Sithole who is attending a football course in Harare. All those are regular players. You find that when one or two players are missing through injury or suspension, it affects the rhythm of the team.”

He said despite winning the league and cup games against FC Platinum there was no guarantee they would win on Saturday.

“We have beaten them twice (league and cup), but that is history now. FC Platinum will not want us to dominate so the match is going to be very tough. We have to be at our best because we know FC Platinum will treat this game like a cup final. Our target is to finish in the top eight so that we defend the BancABC Sup8r Cup next year.”

FC Platinum stars Raymond Sibanda and Ali Sadiki will be out due to injury.

In other matches in the southern region, Hwange will entertain Black Mambas at the Colliery Stadium on Sunday.

Hwange beat Chicken 2-1 at Barbourfields Stadium last Saturday and would want to continue picking up points so that they move up to a good position on the log table.

However, Black Mambas are oozing with confidence as they thumped former champions Caps United 4-1 in Harare on Saturday.

Tripple B could be in trouble if they lose the match against Triangle at Dulibadzimu Stadium on Saturday.

Chicken Inn, now under the guidance of former Motor Action coach Joey Antipas, will travel to Harare for a date with Monomotapa at Gwanzura Stadium on Sunday while How Mine lock horns with Caps United at the National Sports Stadium on the same day.