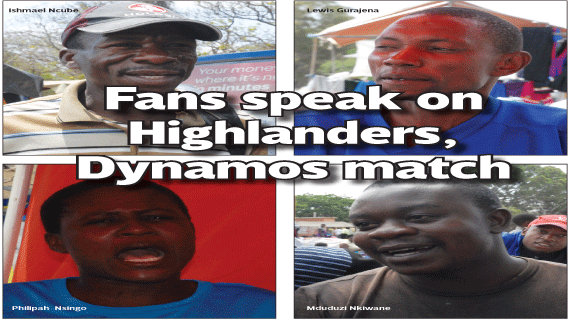 FOOTBALL fans from around Bulawayo have predicted a tough but exciting encounter when the country’s football giants Highlanders and Dynamos battle for supremacy in a Castle Lager Premier Soccer League (PSL) match at Barbourfields Stadium in Bulawayo on Sunday.

Bosso go into the match with an advantage as they are on top of the log table with 47 points from 25 games while DeMbare trail by two points from the same number of games.

Southern Eye Sport took to the streets yesterday to find out the views of football fans ahead of the crucial encounter.

A Highlanders fan from Pumula North, Ishmael Ncube, predicted a win for his favourite team.

“It’s going to be a very good game because we are hoping to win against Dynamos. We have players like Milton Ncube, Njabulo Ncube, Masimba Mambare, Bhekimpilo Ncube and Bruce Kangwa, who are good players. Highlanders will win the game and the championship as well.

“However, one Dynamos player who can trouble us is Murape Murape. He is always a problem whenever we play Dynamos, but I hope that our defence will be able to handle him,” he said.

“Bosso is going to win the match. I know that with players like Mambare, Kangwa, Mapuranga and Lawson we will be happy. Dynamos have been dominating Highlanders over the years, but this is our chance to beat Dynamos. The coach should just make sure that they correct mistakes on the finishing,” he said.

A DeMbare fan from Matshobana, Lewis Gurajena said there was no way the defending champions could lose.

“It is very clear, Bosso is not going to beat us. They should not take advantage of Dynamos not playing well. Barbourfields Stadium is like our home ground.

“Even if we get a draw it is still fine because there is still time. There are other matches coming up. In such matches players expected to score usually fail to deliver, so Bosso should not read much into the perfomance of their striker Gabriel Nyoni,” he said.

“Bosso fans should stop being violent because you find them even hitting robots which is not good,” Gurajena said.

“It is going to be a tough match because DeMbare has not been playing well while Bosso have been playing well. The good thing about Dynamos is that they will rise to the occasion in the battle of the cities. Dynamos were knocked out of the BancABC Sup8r Cup and the Mbada Diamonds Cup, so this is the only chance. Dynamos cannot afford to finish the season without a piece of silverware,” he said.

“Dynamos are going to win the match. I believe that they can score three goals in three minutes although in football a team can win, draw or lose,” he said.

Hazel Mpofu said she would be rallying behind her team Highlanders.

“Bosso will win the match because this is our chance. The goal is going to be a surprise, a player who does not usually score will score,” she said.

Other fans predicted victory for Bosso.

“Highlanders beat Buffaloes 3-0 and they beat Black Rhinos by the same scoreline on Sunday, so they will beat Dynamos,”Nobukhosi Mkhwebu, a Bosso fan, said.