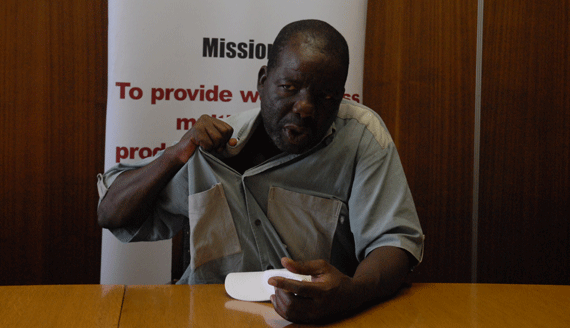 TSHOLOTSHO villager Lot Zondo (51) yesterday narrated how he was allegedly tortured for five days by Zimbabwe Wildlife Management Authority (Zimparks) rangers who accused him of being behind the massive poaching scandal that has rocked Hwange National Park. RICHARD MUPONDE SENIOR COURT REPORTER

Zondo said he now suffers from a weak bladder after he was severely beaten by rangers that accused him of supplying cyanide to villagers which they used to poison elephants with.

Zimparks says just over 100 jumbos died as a result of the poisoning, but environmentalists believe more than 300 were killed.

Zondo had visible bruises on his face and walked with a limp. He went to the toilet after every 10 minutes to relieve himself saying his bladder was now too weak.

Narrating his ordeal at the Southern Eye offices yesterday, Zondo, who is a wildlife tracker by profession, said his nightmare started when he visited his homestead in Phelandaba village, Tsholotsho three weeks ago.

“I left Bulawayo on a Thursday going to visit my family,” he said.

“Trouble started at around 2:30am on Sunday when rangers and police arrived at my homestead. “They called me by name and asked me to come out of the house.

“All in all, they were eight and they said I should give them cyanide, but I told them I didn’t have any. One of the rangers then told me that I was joking as I would produce it.”

He said five of the officers started searching his homestead for cyanide, but did not find any.

“I remained with two rangers who ordered me to kneel down and move on my knees to their vehicle, which was parked about 800m from my homestead,” he said.

“On arrival at the vehicle, they ordered me to put my legs on the loading cab and touch the ground and I was made to stay in that position for about an hour.”

Zondo said they later ordered him into the vehicle where he found five other villagers who had been arrested. He said they were driven to Hwange National Park, which is about 13km from his village where the rangers and the police had set up tents and then all hell broke loose.

“On arrival we found two other people who were handcuffed together,” he said.

“We slept at the camp and at around 4am they came and ordered me to crow like a cock, but I said I could not do that.

“I was made to roll on the ground. The rangers ordered my son Thabani and Robert Maphosa to climb a tree in handcuffs and crow from there.

“After that the head of the rangers a Sibanda then ordered his subordinates to torture us. They poured water on us and made us roll and assaulted us at intervals.

“They then made me squat on top of a brazier until my testicles started boiling. The same was done to headman Patrick Ndlovu and Danisa Ndlovu whose genitals were burnt.”

He said they stayed at the camp for five days being tortured and a ranger he identified as Moyo was the most ruthless.

“On the last day at the camp, the rangers went and bought a crate of opaque beer and started drinking ordering us to sing for them while they drank,” he said.

“We sang for three hours until a police officer from Police Internal Security Intelligence intervened to stop the torture.”

Zondo said the following morning they were taken to Phumula Police base where they stayed for two days before being taken to Tsholotsho Police Station.

“At the police station, that is when I was separated from my son Thabani, Robert Maphosa, Dedani Tshuma, Patrick Ndlovu and a Mthethwa, and locked up in the cells,” he said.

“Danisa and I spent two days sleeping at the charge office.

“On the third day, an Inspector Maphosa came to me and told me I had no case to answer and should go home.

“I couldn’t walk and they had to phone my nephew who took me to his house at Tsholotsho centre before I went to my homestead.

“I later went to Phumula Clinic for treatment and came to Bulawayo for further medical attention.

“Right now I have a weak bladder and my manhood was also affected such that I can’t be intimate with my wife.

“The doctor said it could take me six months to heal.”

Zondo also refuted claims by Campfire chairperson Vumile Dube that he was the one who taught villagers how to kill elephants.

“He can say that, but I know he has a personal grudge against me that emanated from a hunting tender where I helped a white operator get a hunting concession which he’s still operating up to today,” he said.