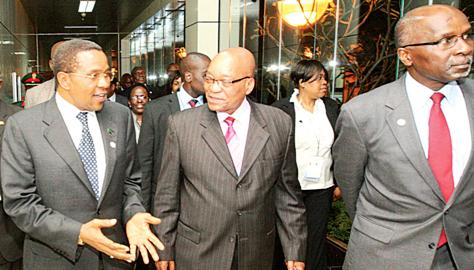 While trying to convince motorists to accept a controversial plan to toll highways in and around Johannesburg, Zuma on Monday said South Africans need to stop thinking like “Africans in Africa, generally.”

“We are in Johannesburg, this is Johannesburg. It’s not some national road in Malawi,” Zuma said during the ruling ANC party public forum.

His comments went viral on social media, with the opposition party calling him to retract them.

Zuma’s office scrambled to correct the diplomatic gaffe today, saying media quoted him out of context.

“The remarks were made in the broader context of South Africa achieving more in the past 19 years of freedom and democracy,” said his spokesman Mac Maharaj.

He said Zuma was trying to justify the sophisticated road system in the country’s economic hub, saying the roads were better than those of other small towns.

The main opposition Democratic Alliance said “the president should rather take a leaf out of the books of other African economies that are actually growing faster than us.”

South Africa’s government has been struggling to enforce a controversial tolling system on roads between Johannesburg and Pretoria, amid strong public opposition.