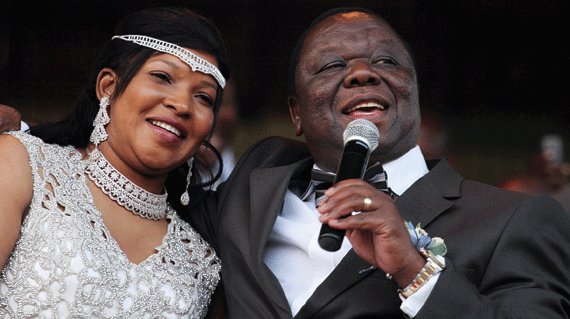 The reports alleged Elizabeth (36) was now staying alone at a house in Borrowdale suburb after she stormed out of their matrimonial home in Highlands.

But Tsvangirai’s spokesperson Luke Tamborinyoka dismissed the reports as “hogwash” and a ploy by Zanu PF to tarnish the former trade union leader’s image.

“That is false and hogwash,” Tamborinyoka charged.

“I was at his house in Highlands only 30 minutes ago drinking tea prepared by Mrs Tsvangirai herself. These are the biggest lies (that I have ever heard).

We saw this coming. It is a well-orchestrated campaign to decimate and finish the man.

“They have failed, but keep on concocting falsehoods about him. How does this move the country forward?”

However, Tamborinyoka refused to arrange for our sister paper NewsDay to meet Tsvangirai’s wife at his Highlands home.

“Why should we subject her to such inconveniences? We can’t say each time there is gossip about her we call NewsDay to come and take pictures of her at their home and dispel those rumours,” he said. “This is just cheap gossip.”

He said Tsvangirai did not own a house in Borrowdale as alleged.

The reports of the couple’s alleged separation come hardly two months after the State media published reports that Macheka had rekindled her affair with a former lover identified as Kennedy Ngirazi.

A few weeks ago, Macheka was linked to a fictitious Facebook account created in her name purporting to be fundraising for the underprivileged.

Tamborinyoka again dismissed the account as bogus and warned the public to guard against being duped by con artists behind the forged account.

His first wife, Susan, died in a car accident in March 2009.

Meanwhile, Tsvangirai yesterday held his first meeting with members of his MDC-T shadow cabinet to work out strategies aimed at keeping the Zanu PF government in check.

MDC-T organising secretary and shadow information and publicity minister Nelson Chamisa said their team would meet every two weeks to provide exit points to the crisis in the country.

The team was assembled last month after the party was routed by Zanu PF in the July 31 election.

Most members of Tsvangirai’s team were Cabinet ministers in the inclusive government which also comprised Zanu PF, MDC-T and MDC.

“We will present alternative ideas in Parliament. It’s not about scoring points; the people of Zimbabwe should score the highest points.