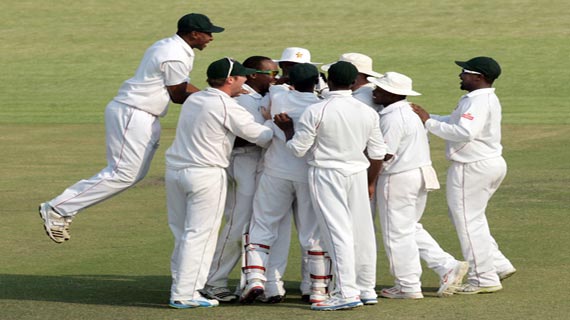 This Test has been played with pay strife and load shedding as the sightscreens, but Zimbabwe were five wickets short of lifting that gloom momentarily. Misbah-ul-Haq stood between them and only their fifth Test win against teams other than Zimbabwe, their first since 2001. It seemed they had given up a significant bit of their […]

This Test has been played with pay strife and load shedding as the sightscreens, but Zimbabwe were five wickets short of lifting that gloom momentarily. Misbah-ul-Haq stood between them and only their fifth Test win against teams other than Zimbabwe, their first since 2001. It seemed they had given up a significant bit of their advantage as they lost their last six wickets for 78 and as the Pakistan openers attacked them for quick early runs, but Tendai Chatara and Prosper Utseya pulled Pakistan back with timely strikes.

Pakistan themselves were chasing a bit of a landmark: a win here will be their third-highest successful chase, and their first of a 200-run target in close to last 10 years. Having fallen behind over the first three days, Pakistan tried the classical big-team trick: bowl tight and let the opposition batsmen make the mistake, and try to demoralise them when they bowl.

The first part worked well. Rahat Ali led a bowling unit that aimed for the cracks as opposed to trying anything spectacular. The scoring stalled with in-and-out fields in place. Three of the six Zimbabweans to be dismissed today fell to poor shots. When their batsmen try to dominate the bowlers, though, they couldn’t keep it up for long enough. Chatara struck the first blows with wickets of Mohammad Hafeez and Azhar Ali, and Utseya accounted for the dangerous Khurram Manzoor for 54, and Asad Shafiq.

That batting freely would be difficult was evident for the morning session. Rahat and Abdur Rehman began with the simple plan of landing the ball near the crack that runs down the middle of the pitch. The ball would jag either side after hitting the crack, and a wicket always looked around the corner. Rahat first got Vusi Sibanda, who batted at No. 6 because he was unwell on the third day.

The pressure – the two bowled the first 12.4 overs of the day for just 25 runs – was palpable. When Saeed Ajmal came on to bowl, Malcolm Waller saw release in a short and wide ball, but failed to keep it down and gave point the catch. Junaid Khan, the other change, hit the crack even more regularly. Once when he did, the ball moved away from Elton Chigumbura, beating his outside edge. From a similar area, the next ball didn’t move, but the muscle memory had already drawn Chigumbura across, and the edge was taken.

The chaos continued after lunch when Brendan Taylor ended his fighting innings with a limp drive at a full and wide delivery. The lead hadn’t yet reached 250. Richmond Mutumbani now began to attack, scoring 21 off the 25 balls he faced after Taylor got out. Those crucial runs added, he got a leading edge to Ajmal, followed shortly by a flailing pull from Tendai Chatara.

Chatara was much more effective when it came to bowling. The Pakistan openers had somewhat rattled the Zimbabwe bowlers a bit as they began to walk at them and drive prodigiously. By the end of the seventh over, they had reached 29. Only one of those 29 was run. Taylor then called on Chatara. Hafeez continued to walk down the wicket. His premeditation consumed him. First he pulled a ball he should have been cutting. If this one fell short of mid-on, the next early walk down the wicket resulted in a leading edge that was swallowed by mid-on. It was followed up by a beauty to Azhar, a length ball that held its line in front of off, squaring the batsman up and hitting the off stump.

All this didn’t deter the first-innings half-centurion, Manzoor, who remained positive and kept attacking loose deliveries. The attitude seemed to rub onto Younis Khan too: they added they added 54 in 11 overs. Zimbabwe refused to let up, though. Utseya, despite being hit for two fours by Manzoor, troubled him with the dip he got. Soon after Manzoor reached his second fifty of the match, he fell to the dip. He pushed forward to defend, but the ball dropped shorter than he expected, and popped up for a bat-pad catch.

Younis soon moved too far across to a straight delivery from Brian Vitori, losing his leg stumps. Between them, the top four hit 21 boundaries in 99 runs. Attacking the inexperienced bowlers seemed something that was discussed beforehand. With four wickets down for 100, though, Misbah went back to the way he has become used to. For company was Asad Shafiq. They defended and defended, but they – Shafiq in particular – never really looked comfortable. Vitori especially troubled him from round the stumps, a wide angle that has got him more than once in this series.

Shafiq’s end, though, came to Utseya when he went back to cut a ball that wasn’t short enough, and edged it through to Mutumbani. Misbah and Adnan Akmal saw off the remaining 9.4 overs without further incident, making sure neither team could sleep more comfortably than the other.