31 July polls: All is not well 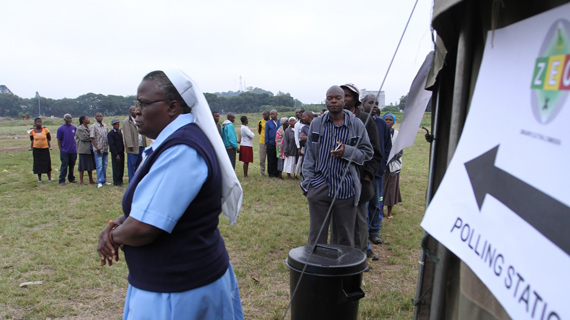 ZESN, as part of its comprehensive effort to observe the 2013 harmonised elections deployed over 7 000 observers to every province and constituency in the country.

THE ZIMBABWE Election Support Network (ZESN), as part of its comprehensive effort to observe the 2013 harmonised elections deployed over 7 000 observers to every province and constituency in the country.

Generally the environment was relatively calm and peaceful. Based on the empirical reports from our observers, regardless of the outcome, the credibility of the 2013 elections is seriously compromised by a systematic effort to disenfranchise an estimated one million voters.

Before election day, the voter registration process was systematically biased against urban voters.

The voters’ roll of June 19, as provided by the Registrar-General, clearly showed that urban voters had systematically been denied the opportunity to register to vote.

Over 750 000 urban voters were missing on the voters’ roll compared to rural voters.

In contravention of the law, the final voters’ roll was not made available in electronic format prior to the election day.

Thus, there is no way to assess any bias on the final voters’ roll. On election day urban voters were further systematically disenfranchised.

At 82% of urban polling stations, many potential voters were turned away and not permitted to vote for reasons, which include names not appearing on the voters’ roll and turning up at the wrong ward for voting.

This is in sharp contrast to rural areas where only 38% of polling stations turned away many potential voters.

This served to disenfranchise thousands more of urban voters.

These factors on their own fundamentally undermine the degree to which the results of the 2013 election can be considered to reflect the will of the Zimbabwean people.

When compounded by the massive bias in the State media, the campaign of intimidation in rural areas, the lack of meaningful voter education, the rushed electoral process and the harassment of civil society, leaving the credibility of these elections severely compromised.

ZESN calls on the African Union (AU) and Sadc to be objective in their evaluation of these elections and take into cognisance the pre-election issues that have a bearing on the ability of citizens to genuinely choose their government.

We reiterate that it is not sufficient for elections to be peaceful. For elections to be credible, they must offer all eligible citizens a reasonable opportunity to register to vote; to inform themselves about the candidates; to vote on election day and for their votes to be properly counted.

We are deeply concerned that for urban voters the first three principles had already been violated.

Methodology As a non-partisan body, Zesn observes elections to ensure that Zimbabweans freely exercise their right to vote and provide citizens with independent information on the process.

As an umbrella network, we do not support any political party, but rather we support the right of all eligible Zimbabweans to exercise their constitutional right to vote.

Our findings and recommendations are made in reference to:the laws of Zimbabwe, Sadc Principles and Guidelines Governing Democratic Elections, as well as other regional and African election standards.

A special group of more than 700 observers were deployed to a sample of polling stations in every province and constituency of the country to provide national representative data in real time. This preliminary statement is based on the observations of this group of observers.

All other political parties combined had polling agents at 46% of polling stations.

ZESN observers reported that 98% of polling stations were set up so that voters could mark their ballot in secret.

However, 12% of polling stations were not easily accessible, including for people with disabilities. This problem was equally prevalent in urban and rural wards.

At 49% of polling stations ZESN observers reported 25 or more potential voters being turned away and not permitted to vote. The main reasons why people were turned away included that they were not on the voters’ roll even though they had voted in previous elections, they were in the wrong wards and some had registration slips and names were not appearing on the voters’ roll.

However, this problem was much more prevalent in urban than rural areas.

In contrast, at 89% of polling stations only five or fewer people were improperly allowed to vote.

At 98% of polling stations there were no incidents of intimidation or harassment of voters.

At 89% of polling stations everyone in the queue at closing time was permitted to vote.

Counting At 98% of polling stations ZESN observers report no one attempted to intimidate or influence election officials during counting nor did anyone attempt to disrupt the counting process.

ZESN is continuing with the observation of the entire process, collation, tabulation and verification of the election results. We urge ZEC to handle the results management in a transparent and timeous manner. Based on our assessment so far, although the pre-election period was calm and peaceful, there are many other critical factors that can undermine the credibility of the entire electoral process.

The preparations were inadequate, voter registration and voters’ roll was flawed, voter education was limited and the special voting was chaotic. Polling day processes were smooth and no major incidents were reported.

We urge observers and all stakeholders to look below the surface as there are some grave issues that have arisen. All is not well.