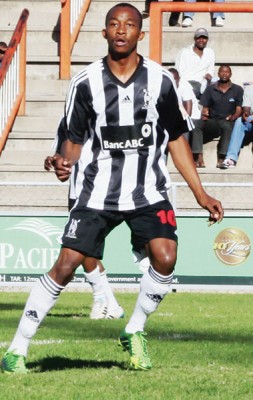 A win at Barbourfields Stadium (BF) seems to be still eluding for Highlanders as they engage Hwange on Sunday in a Castle Lager Premier League match.

Sports Reporter A WIN at Barbourfields Stadium (BF) seems to be still eluding Bulawayo giants Highlanders as they engage Hwange on Sunday in a Castle Lager Premier League match.

Bosso are hard-pressed to start collecting maximum points tomorrow if their title hopes are to be kept alive. They have gone for four league matches without registering a win.

Highlanders sit on position three on the log table with 31 points after they were displaced by reigning champions Dynamos last week after playing a 1-1 draw with Chicken Inn at BF.

They perch neck-on-neck on 31 points with third-placed Chicken Inn who will be away to struggling Black Mambas in Harare tomorrow. FC Platinum on 29 points and Caps United on 28 points — are all in the race.

Platinum have a tough encounter against log leaders Harare City at Rufaro tomorrow while the resurgent Caps United will entertain Monomotapa at the National Sports Stadium on Sunday.

Time could be running out for Bosso and head coach Kelvin Kaindu, as they clash with Hwange, fighting relegation sitting on position 13 with a paltry 18 points from 17 matches.

The last game that Highlanders won was against Hwange, when they beat the coal miners 0-1 at the Colliery on June 2, courtesy of a goal by man-of-the-moment Milton Ncube. After that, they came to BF and lost 0-1 to Chicken Inn and after coming from a 2-1 defeat to Caps United in Harare, they were held to a goalless draw by the Green Machine at Emagumeni.

Highlanders then put up a spirited performance on Sunday and came back from behind to settle for a draw with Chicken Inn at BF. The Bosso fans will be eager to watch the club mid-season transfer window acquisition Gabriel Nyoni, who was on loan to Division One side Bulawayo Chiefs and has been swopped for Cleopas “Balotelli” Dube, who has failed to command a place in the senior team since coming on board.

Bosso last collected maximum points at BF when they beat Black Mambas 2-1 on May 26 after having lost 1-2 at home to new boys How Mine on May 19.

It has been one of the worst records for Highlanders at BF. They also lost 0-1 to Motor Action at BF and are yet to meet Monomotapa, Platinum, Dynamos and Shabanie Mine in the tough second half of the season at Emagumeni. But after the draw with Chicken Inn on Sunday, Kaindu believed his charges were slowly coming back to their game and Sunday’s match could be a litmus test for the Bulawayo giants.

The coal miners, coached by Nation Dube, are coming from a 1-1 draw with Caps United at the Colliery and also need nothing short of victory to steer away from the relegation zone.

Hwange also need to avenge the home loss they suffered to Highlanders on June 2. Highlanders and Hwange matches at BF have always been exciting and Bulawayo fans are in for a treat come Sunday.